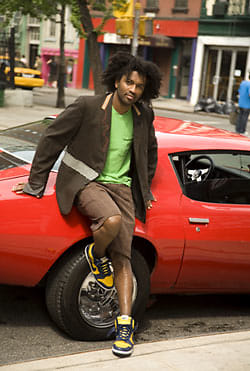 Closest Equivalent: Armin Armiri (5 years ago) of Bungalow 8 and Socialista

Background: Son of Trinidadian immigrants, grew up on the Upper West Side and started going to downtown clubs as a teen before becoming the doorman at club Twilo and then the special-events director at Club Life.

Claim to Fame: Aside from having a supposed Rolodex of 1500 jet-setting high-rollers, we have heard that Cordell has tried to take credit for designing The Box multiple times in conversations and in print via the New York Times:

The Times has since printed the following retraction:

"An article last Sunday about a kickoff for Fashion Week at the Box...misidentified the club’s designer. It was Hecho Inc. — not Cordell Lochin"

Dirty Little Secret: Frienemies say that due to extra-curricular activities, Cordell can't get it up and subsequently needs Viagra in the truckloads.

Lovers: Simon Hammerstein (who has said The Box would not be "The Box" without Cordell), Richard Kimmel, Serge Becker. And, who's in his blackberry? According to him: "Adrien Brody, Amanda Lepore, Amy Sacco, Ashley Olsen, Benny Medina, Chelsea ..."

Haters: Someone's got it out bigtime for Cordell and his partners!

What makes him different: “People is people to him,” said celebrity photographer Marc Baptiste, “It doesn’t matter if it’s Paris Hilton or Gisele Bündchen or the guy walking down the sidewalk—if he has a table, he’ll sit you down. He’ll be like, ‘Um, Gisele, I know you’ve been waiting in line, but my man got to eat. Let me hook you up in a few minutes.’” -Taken from the Observer.

Our own inbox confirms this: "He’s also has been known to kick high rollers and celebs out of their VIP seats at The Box for his loser friends. Maybe that’s why New York celebs have been avoiding the place like the plague???” (Taken from an annonymous emailer as a criticism of Cordell).

Our assessment: If true, Cordell loses points for being a drug addict as well as a blackberry addict. He loses more points for calling his over 1,500 blackberry contacts "choice people". However, he gains points for putting in his dues at Life and being unimpressed when it comes to "famous people". If what we've been hearing is true, instead of seeing this as a fault (like our insider emailer does), we think it is a good thing. Having Owen Wilson and Mary Kate Olsen at your establishment is not what should make you shine, and giving THEM preferential treatment for doing nothing more or less special than the average New York clubgoing trendster is just a sell-out. Also, it's hard to criticize someone for giving their close friends unique treatment because well, being in the same position, we would do the same. He's had to put in YEARS of clubbing to get there and frankly, that's not something we would never want to do. Until we meet the guy on our own, our position will have to remain a neutral one.

(note: We also can't be sure that Cordell actually said he was the designer of the Box. This wouldn't be the first time that the Times has misinterpreted something.)