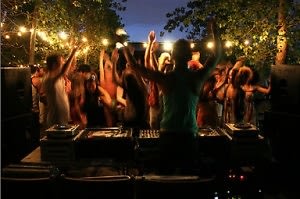 It's been the best and worst and best of times for NYC's outdoor music scene. On Friday Sunday Best announced it'd been booted from its Gowanus home, again, but that organizers had found a solid, secure replacement. And today,  P.S. 1 announced the lineup for its Warm Up dance series.

Last Week Sunday Best organizers and resident DJs Eamon Harkin and Justin Carter likely put an end to weeks of emails chronicling the drama that beset the dance party's home at 400 Carrol Street along the Hipster Riviera after the venue (fka BKLYN Yard, which was fka The Yard) shut down following a happy clusterfuck of an opening Memorial Day weekend.

To recap the boys' headspinning updates:

June 11: 'Back Home...We are beyond happy to announce that we are taking a stab at bringing Sunday Best back to the very tree-specked, canal-side lot at 400 Carroll Street where we started this season and spent the past two years.'

June 17th: 'Keep On...We are beyond happy to announce that we are taking a stab at bringing Sunday Best back to the very tree-specked, canal-side lot at 400 Carroll Street where we started this season and spent the past two years...We're still running without a permit for alcohol for now, but we're hopeful that it'll all be sorted out soon...Alllllllllllright! We'll see you in the sunshine.'

June 25th: 'When BKLYN Yard suddenly announced that it was closing its doors, we tried our best to save our home on the canal for the 2010 season. In the end, even though our liquor permitting process was near completion and all the other necessary logistics were sorted, we were prevented from continuing to operate in the space, and we've been made powerless in our attempts to stay there.'

So that's that. Although Sunday Best won't return to its original home, at least it's no longer a nomad. Yesterday the shindig relocated permanently (fingers crossed) to Brooklyn Fireproof (119 Ingrahm Street, Bushwick), leaving Harkin and Carter free to craft their sets and lug their records without the added burden of keeping their anxious fans digitally abreast of their whereabouts. 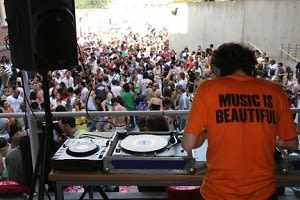 Warm Up is likely to enjoy a more stable existence this summer in the P.S. 1 Courtyard in Long Island City. That dance fest kicks off this Saturday and (finally!) just announced its schedule this morning. Special guests include lots of locals (Animal Collective, Ratatat) lots of locals from DFA (Holy Ghost!, James Murphy and Pat Mahoney's Special Disco Version) and, with luck, a lot less strife than Sunday Best.