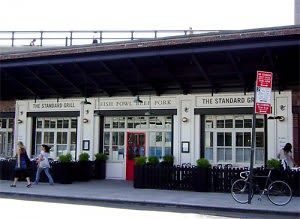 [The Standard Grill. Photo via HC] If the Jane Ballroom is saving NYC Nightlife (in the West Village at least), what is The Standard doing for Meatpacking? André Balazs' Standard Hotel was the city's most anticipated opening of the year. Declared the Municipal Art Society's Best New Building of 2009, and sitting on valuable real estate at the edge of the Highline, everyone was excited to start throwing their parties, and their pants off, at the newest hot spot.  The opening of the hotel's restaurant, The Standard Grill, caused even more excitement, as things like this tend to do. Beyonce and Jay-Z, Anna Wintour, Rick Owens; these were just some of the faces spotted in the first weeks of the restaurant. Bruce Willis was doing a porny photoshot for W Magazine in the hotel before the beds were even installed.

And just when you thought the buzz surrounding the space was going to start tapering off, today word comes that the Standard has teamed with Quicksilver to bring you swimwear. The limited edition boardshorts will be available for purchase from high-tech vending machines located in the hotel starting August 8th. PERFECT! Right after brunch we can get Stanley in a pair of boardshorts and head over to the pool! There's just one problem, the Standard DOESN'T HAVE A POOL.

Oh, details, details....there's always the Gansevoort, or Soho House right across the street. This is the Meatpacking district, remember.

Am I missing something?

Is the Meatpacking district in style again? My intuition tells me that the fact that I would want to spend my Thursday evening on Little W.12th probably means that I  really am in need of a vacation. But last night at the Standard Grill, I wasn't alone.

Upon entering I ran into Steven Kamali and his crew.  Later on, I saw Charity:Water's Scott Harrison breezily walk in, entourage in tow. The group of people that helped start the buzz years ago were circling back to grace it's newest resident with their coolness. But can the Standard save Meatpacking?

Matt Oliver, who was among Harrison's clan, tweeted "NYC's Meatpacking District is beyond gross. I wish they'd bring back the trannies and cow carcasses."

Cow or no cow, there was many a beautiful carcass to gaze at, last night. "I have never seen this many beautiful people in a room at once," said my dinner date - in from L.A. -where apparently their version of the Hotel doesn't have comparable counterparts (alas they, no doubt, have a pool at least)?

I walked out to get a cab home. There was a gaggle of girls heading over to Hogs and Heffers. Oh. Right. I'm in Meatpacking.

Questions left unanswered. Please help....Is Meatpacking cool again?  Was it ever?  Will the Standard's new boardshorts be the catalyst that keeps the whole neighborhood from sinking??

The comment section is open for you to tear up!