Have you seen this thing called a Pollee? It's a female urinal and ostensibly the long awaited answer to lines in the women's bathroom. As someone who goes sitting down I can tell you with certainty, it's not.   It's time for some ladies room myth busting.

Copenhagen, Denmark's culture design agency UiWE recently unveiled this prototype as part of its PeeBetter Project. There are three variations: the high-walled Pollee Shy for those with privacy concerns; the Pollee Topless, which gives "a good view, yet some discretion"; and the Pollee Naked which is pretty much self explanatory. 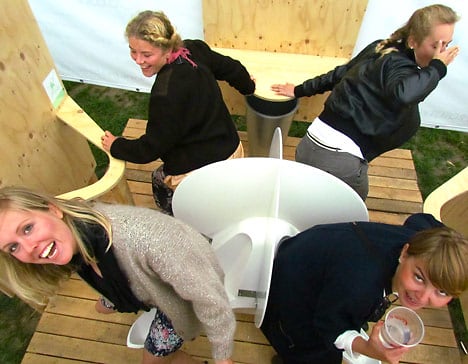 "This seems to be a perfect solution to New York bar and restaurants bathroom problems, where space constraints mean bathrooms are limited to just one or two toilets per space. With the Pollee, you have just doubled or possibly quadrupled your bathroom capabilities. Life just keeps getting better!"

At an outdoor festival in which you have just spent 6 hours in a drum circle melting your face off to Rat Dog while high on acid, this is fine. Whatever. I don't know why anyone wouldn't just pee in the woods while standing in a circle formation grasping hands with friends in lieu of waiting in line to do the same thing in a more specified Pollee spot, but to each their own. But as far as this being the bathroom of a NYC bar or restaurant, no.  No, no, no, no, no. Thank you, but pass.

The Reasons This Will Not Take Off:

Women may all go to the bathroom together, but it's not because we actually enjoying relieving ourselves in packs. It's so we can talk about the guys we are with, where we are going next, how good/bad the music is, what a whore that one bitch is, and other profound world probing questions of incredible depth.   It is not because we like peeing right next to each other. This looks far too close for comfort, even if it is the "Shy" design or whatever "Nightclub" version they came up with, even if it had mirrored walls and a disco ball top. Do you really want to be within elbows reach of the girl you just accidentally spilled vodka cranberry all over, especially when you are in a vulnerable position? No.

What if it's our time of the month? It's natural, it happens to everyone, but it is not pretty and not something you want to tend to around others. Nor do you want someone next to you attending to it. We're all grown ups, we all deal with it, but seriously...just gross. The Internet may have severely broken down the general concept of privacy and loosened our idea of it, but this pushes it too far.

Illicit Behavior. I don't do coke nor do I condone it, but if you are at a club, then someone is in the bathroom, right now, right this very second snorting a line in a stall. This is not gonna work in this thing. First off, snorting will be problem, but more importantly everyone is gonna want some, and that's just not happening. Also, a quickie in the bathroom is out of the question.  Even exhibitionists would find this thing too small. Polle drug use and Pollee sex would likely lead to an arrest.

Logistics. The space in here looks tiny. Women's clothing is complicated and we don't have the pleasure of just whipping it out. Anyone who has worn a puffy skirt or a jumper knows you need room to maneuver to get these things off.  And if your on trend and rocking white, you certainly don't want it rubbing up against the side of a dirty Pollee.

Plus, we don't, for biological reasons I don't feel I need to expand upon, have the aim that men do. The floor is gonna be a mess and no girl will want to put her heels in danger.

Which brings us to another problem. In theory we all squat for sanitary reasons and most of the time this is how it goes down. However, stilettos can be hard to balance in, especially if you are drunk or have been standing for hours. Sometimes you have to sit. It happens.

There's also the times you drink way to much and you have to lay down or get on your knees:

This is all not to mention self respect.  Maybe some do, but most women don't have penis envy of any kind. We don't wish we had balls to scratch and we don't have any latent desire to pee in a urinal even if you call it something that sounds nonthreatening and cute. Make it pink and it's still not appealing.

After spending a ton of money on our outfits, taken hours to get ready, had our nails manicured precisely, made it past the doorman and into the club, and plunked down anywhere between $8-$23 for a finely crafted cocktail, we are not going to be degraded by going into a trough. 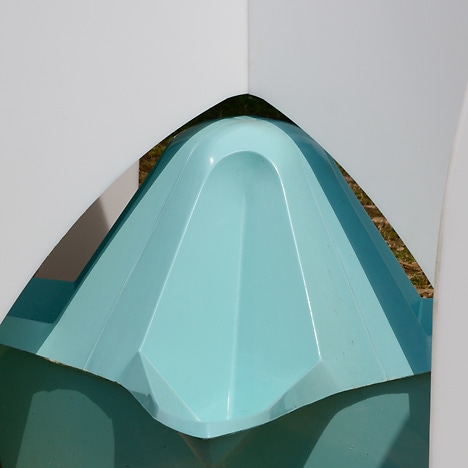 Ladies, do you agree?  I am not a potty snob. I have no problem going in dive bars, in truck stop bathrooms, or outside. Full disclosure, I have even gotten ticketed for peeing in an alley in Bushwick when the line at the loft party was too long. And this was on a second date. And still, I'd rather hold it for hours than go in this.