When we got the invite for Richie Akiva's Birthday party we were excited and intrigued. As many of our readers know, 1OAK is our unofficial home away from home and we are there at least a couple times a week. Richie's invite listed about 40 or so female celebrities, models and socialites to host his soiree last Friday at 1OAK. Not to say the party was all frivolity, Richie threw the party in conjunction with Charity Water and the Charity Water plexi-glass box at the front of the club was filled with cash by the end of the night....but I am getting ahead of myself.

Naeem unfortunately had to work the Eldridge so I had to make it on my own. I called on my great friend, the lovely Grace Gomez Brea to be my date for the evening and off we went. 17th Street was blocked by a police car and you could not get through unless you were in a limo. So Grace and I hoofed it the final block. We could see the crowd from the end of the block and were seriously hoping that Binn Jakupi or Sherry Cosovic were at the door, because it was mayhem. We breathed a sigh of relief when we walked up and saw Binn and after a 30 second wait, he pointed to us and said "those two, in!" 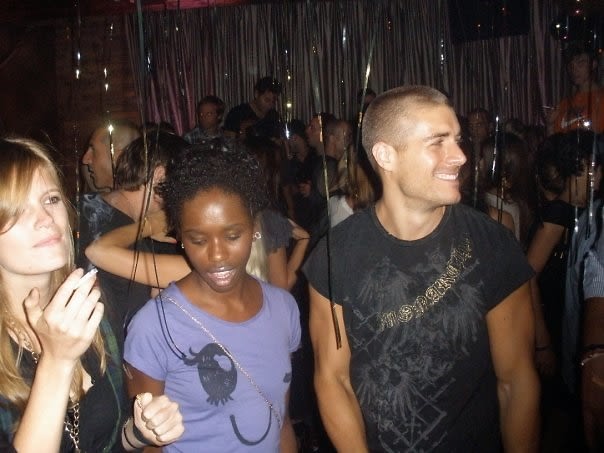 Once inside we were greeted by the sight of not only thousands of balloons but also 1OAK's publicist, Shadow PR's Lisette Sand Freedman. She was chatting with US Weekly's Ali Puluti, and after small talk we headed deeper into the party. In quick succession we ran into Adam Alpert, Sherry Cosovic and Rachel Zoe. I sat with Rachel for a few minutes to chat. She has always been warm and accommodating and that night was no exception. It probably helps that Marc Jacobs introduced her to me! The place filled quickly and we headed to our table hosted by Slim and took our perch on the banquette and stayed there for the evening.

We were told there would be special performances and were not disappointed. Robin Thicke started the mini concert and was followed by John Legend. Others seen at the celebration include Scott Sartriano, Jeffrey Jah, Danny Masterson, Eric Ray Davidson, Jessica Stam and Gossip Girl's Jessica Szohr. There was a rumor that Mr. Jay-Z himself would be performing but we left before the end so we can neither confirm nor deny it.