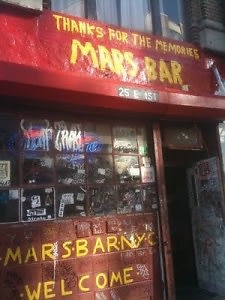 The Mars Bar death watch has been going  since December when it was announced that the building that holds the storied bar would be torn down to make way for shiny, luxe condos. After false alarms and incorrect announcements over the final day, the bar has finally shut its doors for good. But not because it had to just yet.  There is a whole other reason altogether.

It's an understandable feeling. Just dragging out the inevitable can be exhausting. But the reason goes deeper. They were shut by the health department.

The Mars Bar was closed because inspectors observed approximately 850 fruit flies in various areas of the restaurant and in a bottle of alcohol. Additionally, there were conditions conducive to a pest infestation including standing water on a floor near an ice machine, water logged wooden flooring and bottles in a box with fluid in them. The bar did not have a food protection certificate holder present, had a cracked and chipped wall, unsecured gas cylinders and did not have proper test kits for chemical sanitizing of dishware.

It would be a lot to fix for a little time if they even managed to pull it together before the wrecking ball arrived. And while the final blow came from the DOH, the gritty space, known for its dirty bathrooms, colorful locals, and amazing jukebox has become just another piece of the old village sacrificed to time,  progress, and real estate.

The Last Bastion of Indecency has fallen, but Penza has stated previously he is looking to open up a new space.