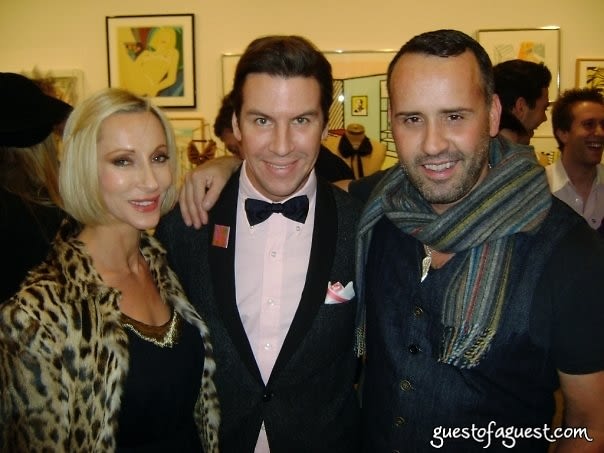 Go HERE for more photos from last night and TAG YOURSELF and YOUR FRIENDS!

So nobody will believe us, but we seriously planned on a a very quiet evening. We attended the TImo! event at Phillips de Pury because we adore TImo Weiland, and planned on heading home afterwards. As they say the best laid plans.... At the event we spied all the usual suspects including: Peter David, David X. Prutting, Sarah Basile, Jules Kirby, Devorah Rose, Paul Johnson Calderon, Kristian Laliberte, Leven Rambin, Mike Nouveau, Dalia Oberlander, Susan Kilkenny, Luigi Tadini, Arthur Boujenah, William Heath, Tia Walker, Liam McMullan, Annabel Vartanian, Ally Hilfiger, Joseph Ungoco, Allan Rish and many, many more. The event space is actually a great art gallery and people were checking out the art as much as they were checking out Timo's wild neckwear.

The gallery was in the same building as the Children's RX benefit and a bunch of us decided to check that one out as well. We got inside had a quick cocktail and started to head home. We went to say our goodbye to Leven and she insisted that we accompany her to Citrine for Christian Siriano's Birthday Bash. Level 42 vodka was served as well as a strange, new champagne that is served in what looks like small babybottles and when you're carrying it around looks like you are carrying a urine sample. We met our FB Scrabble buddy Andy Cohen and kissed the birthday boy Christian. Devorah, Sarah and Jules showed up with Martin Dawson in tow and we all perched and posed.

Leven needed a nibble so we decided to head over to Markt quickly for a little bite. Our favorite convo:

Us to Mike Nouvea: " We are going to go, you want to stay or come with us?" Mike: "Am not staying here if you guys are leaving." Us: "Ok we're leaving," Mike: "Alright I'll see you later, I'm staying."

So minus one we headed to Markt to have our last meal (sniff) with Leven before she heads back to Hell-A. Other stops over the rest of the night included: Rose Bar, Norwood and the Tenjune Two Year Anniversary Party. Surprisingly we were home in bed before 2!

PS-Special Thanks to Armani Exchange/Andrea Burman for Scott's vest and  Naeem's sweater. And to Evisu/Adam Schmidt for our jeans.  All got tons  of complements!  Thank you guys so much!