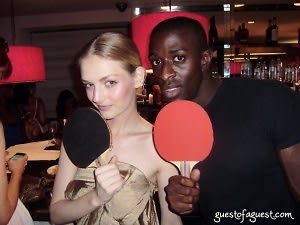 Go HERE for more photos, and TAG YOURSELF in the Gallery!

So we were excited to get an invite to Soho House Dbag Free 100th Annual Ping-Pong Tournament hosted by Eric Richman, Amy Sacco and Joe Infantalino. Not because we love ping-pong, but because all spectator sports usually involve copious amounts of drinking and that is always good. We planned for dinner with the best dressed ping-pong player of the night, Lydia Hearst Shaw on the roof of the Soho House. It was nice to catch up as Lydia has been traveling more than her fair share this summer.

After drinks and a couple of cocktails (is it just us or do drinks not taste as good in plastic?) we headed downstairs. We told Eric that Scott won't be participating due to his complete lack of hand-eye-leg coordination. The last spin class he took he fell off the bike when it got to the part where you lift your hands over your head and pedal at the same time. Despite the warning Scott, along with Naeem and Lydia were all bracketed to play. We both lost in the first round. We attribute our loss to the fact that both of our opponents were the hottest guys there and we were distracted.

Anyways, these people take their ping-pong seriously, some even brought their own paddles! The best of the three of us was shockingly Lydia, who despite playing in a strapless dress and 5 inch heels, gave her competitor a run for his money. Sadly, she lost 11-9. Others spotted include: Amanda Richman, Kristian Laliberte, Devorah Rose, Maggie Hong and Megan Ash.

After our stunning losses, we lost interest too, and headed to Rose Bar for a nightcap. We headed home and for once were in well before midnight. Another great night.....