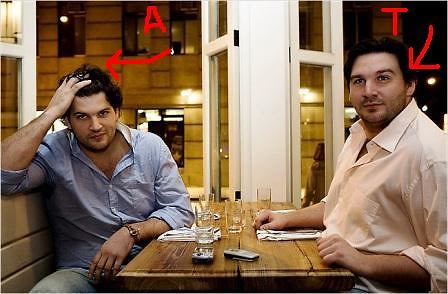 DBTH likes to be in the know about the city's hot, new places.  It's his job.  He's just not very good at actually SOCIALIZING at said hot spots.  Which is why you will only get half of the story from him.  Today he posts on Southside, the new spot breathing life into Bella's corpse. It's titled "Previews at Southside", which is ironic considering he has yet to see the place, and offers zero preview(s).  I, having actually BEEN there Saturday night for its FIRST private party, can tell you that it would knock his socks off, should he ever happen to emerge from his basement and his baseball cards.  Last night, the party they threw was for Mickey Avalon and took place after his concert, which I missed because I was still recovering from an open bar Saturday. All week long we will be giving you clues to the insides and out of Southside (you will be in shock at the transformation and barely even remember ever making out in a maroon bench behind exposed brick walls).  Now, I don't know much about redesigning a night club, but it is pretty impressive what the Martignettis managed to do in only a few weeks.

A teaser: What was Southside's first name????

Stay tuned for photos, and more this week until it's officially (invite only) opening party on Thursday.  Maybe Scott (DBTH) can be my +1?