[Bella's (R), Southside (L)] Anthony and Tom Martignetti will toast the 1st birthday of their Soho club, Southside, on November 5th (invite below). But what are they really celebrating? Besides its name, little about the venue has changed since the brothers brought a loyal preppy crowd to 1 Cleveland Place in 2006 with Bar Martignetti and its downstairs bar, Bella's. 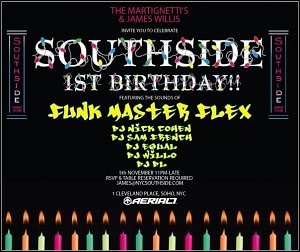 What's actually being recognized next Thurdsay is a time-honored tactic used by bars to stay relevant in NYC by putting a fresh spin on the same old formula that brought them initial success.

To pack in fickle New York crowds, clubs have to reinvent themselves. Even if a venue appears to be going strong (as Bella's did when it became Southside last fall), overhauls are not unheard of. Still, as much as nightspots like to shed their own pasts, they often look back in time for inspiration. And so Southside mimicked the palm fronds and reservation policy of Bungalow 8, which itself recalled the tropical motif of Indochine, the cokey '80s celeb magnet (who are celebrating their own 25th Anniversary with a party tonight at Bergdorfs). And of course, Bella's was widely seen as a downtown satellite of pearl and pastel-friendly Dorrian's.

In their race to avoid becoming cliches, club owners constantly rely on a big one: everything old is new again.