Andre Balazs' new gem came in the form of the Boom Boom Room, is a place that not only makes you feel on top of the world, but gives you a pretty decent view of it...just DON'T CALL IT THE BOOM BOOM ROOM!

The lounge, which has been hosting parties for the city's social elite for weeks now, found itself in a little bit of legal trouble with it's choice name. Luckily, the proposed new name, "QT" didn't stick, but "Top of the Standard" did; which is what the official name of the place has become.

The Boom Boom Room Top of the Standard is being touted as THE place to see and be seen. Some have even gone so far as to compare it to what Studio 54 was like back in it's heydays. Although that's been quickly rebutted by others.

What's in a name? Not much. It's not like you need one when you walk in this place to tell you where you are. The new name, "The Top of the Standard" - which it is officially to be called from now on by the party for Sasha Lazard last night (the invite says so!), doesn't matter so much...you're still on top of the world when you walk inside. 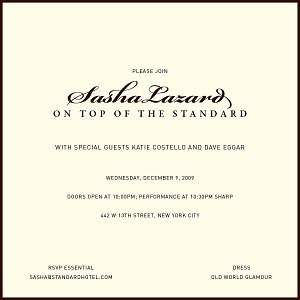