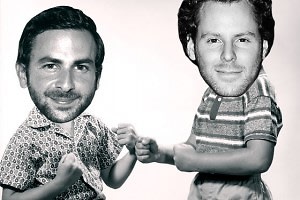 The Social Network was tops at the box office this weekend, raking in over $22 million. But Sean Parker, a subject in the "Facebook movie," couldn't live up to the party boy image Justin Timberlake brought to the screen after he was denied entry at Provocateur on Saturday night.

[Photo originally via GrubStreet (we photoshopped Sean Parker on...)]

According to Page Six, the Napster founder and early Facebook business partner rolled up to Mike Satsky's Meatpacking District club late Saturday night with two lady friends in tow. Satsky and gatekeeper Sheena Tesora didn't let the crew into the joint because it wasn't on the strict reservation list. Parker was displeased, blaming the snub on discrimination against his diminutive guests. A "witness" says Parker lost his short temper and said:

"This is profiling! I know you guys have a height requirement for women, and the reason these girls can't come in is because these girls are too short."

Parker claims staff members called the women "midgets and elves." Which would be hard to believe were there not earlier reports of bouncers rejecting "short, fat" friends of even fairly notable NYC party people. Then again, Satsky & Company might have been leery of Parker himself if they'd contributed to The Social Network's muscular opening gross. David Fincher's film portrays Parker as having quite the sweet tooth for nose candy. (He denies the habit, though reports we received suggest otherwise.)

Despite its name, Provocateur would definitely want to bar out of control guests, especially if rumors of a harsh light being shined on the place by the IRS are true.

Meanwhile, Timberlake could presumably walk into any club on the planet without taking any guff.