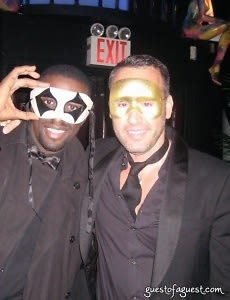 We've been surprisingly good boys for the last three days. We've been going to just as many events as usual, but we've been home by 11. Monday found us at the Blackbook welcomes Steve Lewis at Aspen Social. We serendipitously ran into Rachelle as we exited cabs and hit the event together. We ran into Steve Lewis first thing. He was holding court with Blackbook's Cayte Grieve and owner Ari Horowicz. No sooner had we said our hello then Steve insisted on giving us all a tour. Once the tour was over we ran into Jen Gatien, Steve Kasuba and Debbie Harry. Having seen the host and the space we made our exits.

Tuesday we first went to John Varvatos's private dinner at Mario Batalli's Italian Wine Merchants. The party was to commemorate the watch that John designed with Ernest Benz. We were greeted by Robert Fowler and ate some scrumptious pasta and juicy steak. We rushed out to make the next party at the IAC. The party sponsor was Audi and the hostess was the lovely Padma Lakshmi. You couldn't swing a dead cat without hitting a promoter and in a few minutes we ran into...

Bernie and Brady, Mark and Eugene, Chris Santos and Prince Moses. We chatted with Greg Link, Kristian Laliberte, Devorah Rose, Betsy Rudnick, Tara Fougner, Jasmin Rosemberg and many others. The servers were dressed in what looked like Whitney Houston castoffs from the Queen of the Night Number in the movie the Bodyguard. We stayed for the Common performance and headed out.

Wednesday night we felt charitable so we hit the PROJECTOVC for Ovarian Cancer Black Tie Masquerade at the Imperial. We ran into our old friend Erma Eliazov who was excited to tell us about her new bag line launching soon (look for more in this column soon). We also were profiled for "What to Wear" by Joseph Ungoco. Wyclef was the host and the hostess was Miss USA 2008, Crystle Stewart. We then jetted to Bowery for the Furla Party. The party was being handled by our friend Greg Link's company Fingerprint. The PR Diva in charge was Sasa Nikolic and Tiny Tim Garcia was on hand for support. We ran into friend Jason Stavely and Richie Rich, shared a cocktail, a laugh and out we were.

So besides today being Scott's Birthday it is our first annual Masquerade party. We would like to thank in advance our sponsors, MAC, SKYY Vodka, Alex and Anni Jewelry and special thanks to Interview Magazine. We also want to thank our hostess Lydia Hearst Shaw, our DJ Angelos Styliano and the following people for being invaluable to us: Gillian Hearst Simonds, Christian Simonds, Eve Salvail, Susan Kilkenny,Eric Ray Davidson, Ilaria Urbinati, Nicolas Wagner, Tim Bitici, Sparrow, Matt Levine, Jason Lawrence, Michelle Jimenez, the Staff of the Eldridge, Marie LaFrance, Richie Rich, DJ Angelos Styliano, Scott Sartiano, Frank McHugh, Oren J, the staff of 1OAK, Renata Lopes-Merrian, Rachelle Hruska, Paul Brickman, Jarrod Turner, Megan Benson and probably many others that we are inadvertently forgetting for making, what we are sure will be, a special evening. We look forward to seeing some of you there tonight. The rest can read about it here tomorrow!