Ever wonder how a young nightclub promoter manages to amass enough money to become a partner in larger operations such as The Box or La Esquina? Well we don't really have the answer either...but a little more digging after our profile on Cordell Lochin turned up a rather interesting and sordid past. Apparently Cordell has been involved in a elaborate marijuana distribution and smuggling ring, where marijuana originating out of Montreal was smuggled in through the US/Canadian border. Excerpts from court documents include: 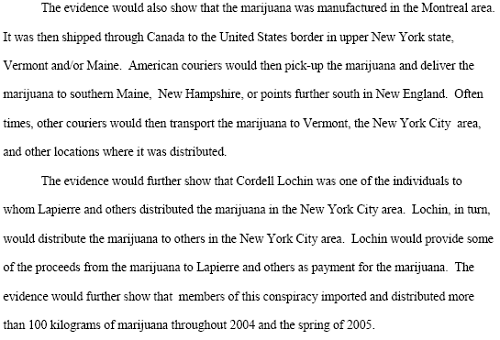 On November4,2005 U.S. Marshalls executed an arrest warrant on Cordell. He was charged with 3 counts:

1) Count One: conspiracy to import marijuana

2 Count Two: conspiracy to possess with intent to distribute marijuana

Since then He has plead guilty to counts 1 and 2, and his sentencing hearing is on the 10th of October 2007. So remember a few weeks ago when La Esquina and The Box both got raided on the same night, and people thought someone was out to get them? Well Cordell is a partner in both, so perhaps they were right in that its not just a coincidence.