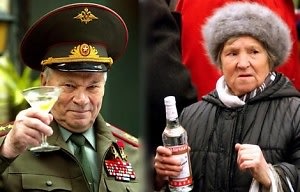 When it comes to an overbearing state, Russians have bigger worries than a ban on late night booze sales. But it is Russia, and a new law criminalizing midnight vodka runs in Moscow is bound to raise eyebrows. It also reminds us of the few remaining "blue laws" still in place in New York. -

In response to an alarmingly high number of alcohol related deaths in Russia--23,000 annually--local governments are looking to halve consumption by 2020. As of 2003, Russians drank 10.3 liters of alcohol per capita. That's less than Luxembourg (15.6) and the top real country on the list, Ireland (13.7 liters), but more than America (8.6).

Anyway, in Moscow you won't be able to purchase vodka or cognac between 10pm and 10am starting next month. (No word from the Post on whether gin, whiskey and rum flew under the radar, though with Russians that might not matter.)

Of course, Russia is just catching up to puritanical America when it comes to these sorts of laws. Even libertine New York has a few:

Restaurants and bars cannot serve alcohol before noon on Sundays, as any hungover brunch patron in desperate need of a Bloody Mary has found out.

The sale of alcohol for off-premises consumption is banned from 4am though 8am Monday through Saturday (and 3am through 8am Sundays), which anyone who is buddies with their local bodega cashiers knows is never enforced.

The sale of alcohol for off-premises consumption was banned, period.

We actually don't have it that bad. Especially compared to Boston, whose happy hours are big bummers since bars cannot off discounts on booze and beer. But hey, at least you get a buck off on mozzarella sticks.

But don't feel too bad for Russkis. Restaurants, bars and nightclubs are still allowed to serve alcohol 24 hours a day.