We've all been there. Trapped. There is soooo much going on just about everywhere except for the place where you are standing, talking to this person, who is 50% of the time hitting on you, 50% trying out their self-help monolgue, and 150% wasted, slurring, and unbearable. It can be difficult and take intense strategic manipulation, but you can break free. 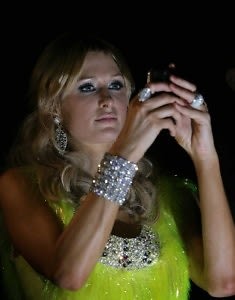 A new Pew study shows that some 13% of savvy cell users "pretend to be using their phone in order to avoid interacting with the people around them." It's not a big number, but perhaps these technical magicians and their trickery of pretending to read old emails like they are new and looking at their phones with the facial skills of a trained thespian are on to something. Paris Hilton pulls this shit all the time. The chances you'll get caught aren't that high and they might get so annoyed at you playing on your phone they walk away. If not, no one can argue when you excuse yourself to take a call from the hospital or just to say hello to Grammie. She gets lonely at 3:30am.  [Via]

The bathroom break works like a charm in almost all situations and you're being honest. Your just going to hit the loo...in the next bar or your apartment or like, 2 hours from now.  It's inevitable at some point. If you stay at the same place and they decide now is a good time to wait in line to "keep you company," it might not work and you may feel forced to actually wait the 20 minutes only to walk in and have a smack down session with yourself in the mirror while trying to sober up so you can appropriately deal with a boozy hanger-on. It might, worst case scenario, end up with them trying to get some stall action. Or you know, it might end up actually working out.

The bar run is the least foolproof of actions. Chances are the lush you are talking to will want to come with you, but it's worth a shot. If they accompany you up to order, you may even get a free drink out of it. If you are going to be stuck in a situation, you might as well make the most out of it. 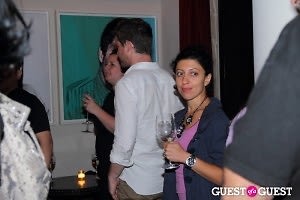 The pass off occurs when you see someone who you know and decide its time to introduce and immediately jet. Just get out of there right after you linger on the words, "and this is.." By the time they've finished their two syllable name, you've disappeared into the crowd if you manage the mechanics correctly. No one around you know? "Don't I know you?" is always an undervalued sentence when it comes to striking up a conversation in order to leave one. "No. I'm (your name) and this is..." Pause for them to answer and Pass Off! Now! Speed is the name of the game. The woman to the right has the tell-tale smirk of someone who just successfully nailed this tactic.

If all else fails, it has to come to this.  Pretend like you forgot English, talk about the time you saw an alien spaceship or killed someone, bark, make an off-color statement about how much you hate a particular race, say nothing and make no expression at all. You have to really play this up though. Drunk people don't pick up on subtle social cues. Just be aware that the people around you will bear witness to your performance, so this is better saved for a moment when no one else is around.

So acting insane is pretty tough. It's time to go the simple route. You were raised right, you know your manners and you hate being rude, but you've tried everything and there is no other way of getting out of the situation. Don't make excuses. Don't worry about gracefully bowing out. You don't need to be Fred Astaire to pivot heel and walk away. 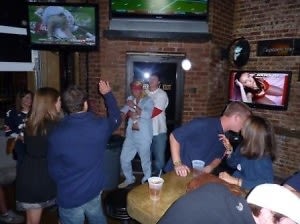 Is this person really wasted and way aggressive? Shit just escalated. Don't mess around with trying to figure out how to ditch them. Save yourself from being on the receiving end of Jäger-laced vomit and just ask a bouncer or the door guy or the biggest person near you to help out.

The team over in the Hamptons is thinking a lot like us today, but they've got something more specific on their mind with tips of how to avoid a guy you would rather not be talking to. [6 Ways To Blow Him...Off]

bar ettiquette• how to get out of conversation