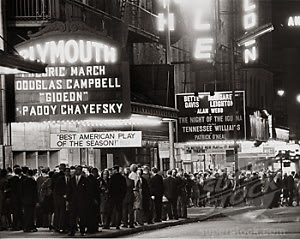 Sam Sifton bemoaned the state of theater district restaurants in his positive review of Mexican exception Toloache. But sometimes what you crave after two or three hours in a cramped Broadway seat is a stiff drink. Below are some great bars to hit post-show, or escape to at intermission.

These places are holdouts of a very different Times Square, where you were lucky to make it to your show at all. And none will cost you even a fraction of the ticket price:

Holland Cocktail Lounge is located on a charmingly desolate stretch of 9th Avenue, Holland Lounge has risen from the dead more often than Capeman. This is the type of bar your grandfather would love. As always, you should learn something from him.

The cast of characters at Port 41, located on a barren street bisecting the Port Authority, deserve some sort of honorary Tony. Bartendresses in bikini tops dole out cheap suds and free hot dogs to a motley crew of bikers, hobos, weary commuters, nearby office dwellers and, I'm pretty sure based on one experience last summer, Polish

Rudy's is a Hell's Kitchen institution since 1933 may be best known for its free hot dogs. But the hooch is dirt cheap, the pig guarding the door is friendly and out back is the rarest of dive bar amenities, a (cement) beer garden. 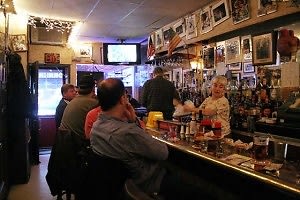 Owned by and named after former boxer Jimmy Glenn, Jimmy's Corner won't get a Travel + Leisure photo spread anytime soon. But friendly service--get to know Swanee, Jimmy's wife--and rock bottom prices make up for  fluorescent lighting and crumbling ceiling tiles. Try not to blush when mostly young, female and attractive bartenders yap about their sex lives. And look out for Times and Conde Nast staffers indulging in every journalist's favorite pastime.