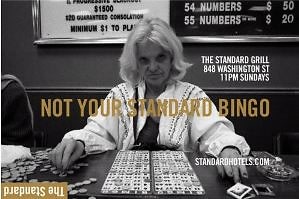 A convivial, welcoming, melting pot without dropping tons of loot is a rare commodity in New York nightlife. Now try to find all of the above on a Sunday evening, it becomes exponentially more difficult. Between the exclusive clubs, raucous bars, and invite-only events, finding an evening activity can be a daunting task. The Standard in NYC, home to the infamous Biergarten and Le Bain, may not be at the forefront of one's mind when searching for an easy entrance and a laid back crowd. However, The Standard Grill is host to one of New York's lesser known evening attractions. Every Sunday night for almost the past two years, The Grill at The Standard has held a bingo night.

Bingo isn't new for The Standard; in fact, this game had previously been enjoyed at the Standard in Miami before migrating up north. The environment, however, is drastically different. In Miami the game was played midday, poolside, and probably served up with mojitos. Once the idea caught on, the management at The Standard decided to expand this activity. Upon it's arrival in NYC the sunday night activity has been under the care of two men, Michael Stauffer, and Joe Harris. To describe this evening Michael himself said it best.

"it's not something you can explain. You have to come see it for yourself." ‪#NotYourStandardBingo‬"

Check out all the reasons why we love Bingo At The Standard Grill!