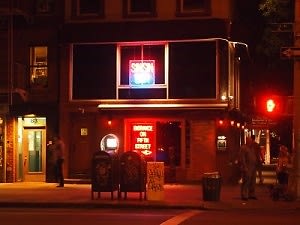 Yesterday Grieve noted that beleaguered East Village bar Sin Sin would close at the end of the month. Then Grub said it would "close, re-open and go a different route." Whatever happens, it looks likely that neighbors will win this battle in the war on excessive nightlife. What's the next target?

Anyway, it's a vibrant, quirky stretch. And its constant foot (and sidewalk table) traffic infuriates the neighbors, who often lament the strip's overcrowding at raucous Community Board 3 airings of grievances.

So, if and when Sin Sin shutters for good, locals are less likely to get some overdue shuteye than focus on a new enemy. And Lit is a likely heir to the throne of neighborhood opposition. The bilevel punk-velvet rope hybrid has its own reputation to contend with, from notoriously scuzzy bathrooms ("Bumps, Then Dumps!" goes the loo graffiti), to lax enforcement of the smoking ban in its musty live show and dance-happy basement. (Anyone who has even taken a whiff upon descending Lit's stairs knows cigarette smoke could only improve the olfactory situation.)

Lit played smart and reached out to neighbors months ago, offering to turn down the late night volume. But the NIMBYs are on a roll, and it could be lights out for Lit and other nearby nightlife options if they fan the flames.