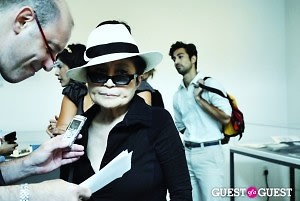 With all the time Yoko Ono spends protecting John Lennon's name and legacy, one has to wonder how she has time to create art and promote peace and love and understanding. She is currently threatening to sue a Lennon-themed bar in Scotland named, aptly, Lennon's.

Her lawyer has been in touch with Mike Craig for copyright infringement and they just might get a fight. He claims he has spent money on Beatles memorabilia for his pub. He can't imagine no possesions! Even if he tried!

Ono has demanded the bar be renamed in the next 14 days. Thus far it's been agreed that the sign will be removed, but after five year's he's hesitant to change the name.

And why does this matter? If you're last name happens to be Lennon, don't name your child John. It will be a lifetime battle with Yoko.