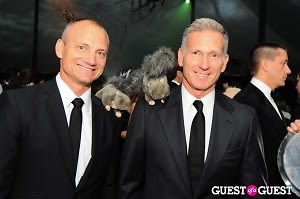 At the Central Park Conservancy's Green Ball last night, we approached Harlan Bratcher, president and CEO of Armani Exchange. He, along with his partner, Christie's head of communications Toby Usnik, wore sleek black suits--each with a plush shoulder-perching squirrel. Bratcher dished on fashion no-nos and Sciuridae.

The head of the trendy, casual wear arm of Armani, described his inspiration for the costume.

"Spending so much time in Central Park, I love the squirrels. I've lived most of my life in New York on the Park, and spending so much time running, walking through it, sitting, reading--squirrels, you know, it just struck me as funny: squirrels sitting on a businessman's shoulder."

Usnik had named his squirrel Rocky, though at the time of the interview, Bratcher had yet to invent a name for his creature. 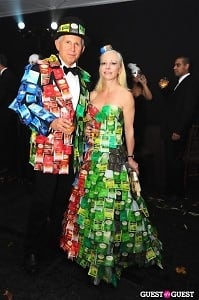 But Bratcher was disappointed by what he viewed as a lack of influence from his apotheosis of a fashion icon.

"I was waiting to see what influence Lady Gaga would have," he confessed.

We then asked him what he viewed as the biggest fashion faux-pas in New York, he focused on a facial hair "don't."

"Just personally, and not from a fashion trend point of view, is the kind of handlebar mustache. You know, it's cute, and it's retro, and I understand where it's coming from, but I think it's one of those photos you're going to see a picture of yourself, you know, 20 years from now and think 'What?!' But anyway, it's funny and it's whimsical, and I like it a lot , but I think, personally, I'm a minimalist, so I try--except for my squirrel--to blend in."

"[Giorgio Armani] is one of the youngest people I know. I think youth is the answer. For any creative person naive, on the side, you get in tune with what's happening and what will happen."

And as a costumed moon (and the dark side of the moon) approached, we made quick exit, resolved to return home and shave.