Derek and Daniel Koch are back from the Hamptons, and ready to start up their beloved brunches in Manhattan. But where do you go when you've already done Le Bibloquet, Jour et Nuit, Merkato, East Hampton Point, Pink Elephant, and Revel? The Plaza Hotel.-

Hard to believe it, but the Koch brothers are already in their third season of running one of the most popular brunches in the city. They've conquered the Hamptons and the Meatpacking District, but this year, the brothers have set their sights on the storied Oak Room at The Plaza Hotel. 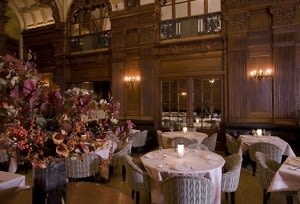 The Oak Room is the sort of place Barbara Walters will meet Ted Koppel for a gimlet, so it takes a stretch of the imagination to visualize it with hot twenty-somethings wielding sparklers and giant bottles of champagne. But The Plaza, which has never fully recovered from its partial transformation into condos, is long overdue for a facelift.

Recent events at New York's most famous accommodations include the American Academy In Rome's annual Gala Dinner, an event for Turnaround For Children, and a slew of UES society luncheons, but there's been no real high profile party since Diddy's 40th birthday last November.

Truthfully, young people don't really go to The Plaza unless it's at the behest of out-of-town guests. But the Koch brothers have such a loyal following, it's sure to transform the place into something much, much livlier.

Could the Koch Brothers turn things around for this lovable hotel, and actually make it cool again? Stay tuned to find out, or better yet, check it out for yourself; their first party will be this Saturday.