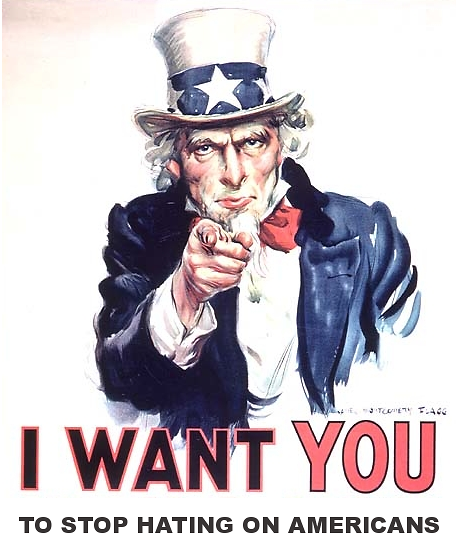 What the heck is it with people (Europeans/Latins) saying "I love America, but hate Americans". I'm not talking about a snobbery based on a disagreement with Bush's foreign policy, but rather a more general position towards our culture and people. A widely and closely held prejudice that "Americans" are so...well, "American". What does this mean? It means we are unsophisticated, myopic, not well traveled, we don't know how to have fun, and we don't sit around at outdoor cafes all day drinking vino tinto and "smoking fags".

So can this really be true? Well in order to digest these criticisms, you have to recognize that this is a typical strawman argument. See our critics have a very narrow definition of sophistication, which is limited to:

Based on this definition, most Americans fail miserably, and clearly don't pass as being "sophisticated". But therein lies the fallacy of this argument. Sophistication is not simply restricted to the imposed constraints of a few jet-setting euros. Rather, Sophistication embodies a multitude of criterium. For example, you will NEVER hear a critic say that Americans are not educated. Why, because Americans on a whole posses a massive amount of education and higher-level degrees. And our educational institutions attract our very critics in droves. No, you won't hear anyone say that Americans aren't intellectually sophisticated, because it is simply not defensible.

So, critics are forced to focus on the more superficial "shortcomings" of Americans. The obvious ones. The ones that they can easily sell to another undiscerning individual who will eat it up. And if you challenge the stamp they have placed on the word "sophistication", they are likely to fire back with the loose adjective "worldly". "Yea, well Americans just aren't worldly". What does this mean? We aren't of this world, we don't live on planet earth? Oh, wait I get it, it means we aren't well traveled. Well unfortunately, we don't have the luxury of buying a euro rail pass and hitting 5 different closely-packed countries in 5 days.

Would we like to have another language? Of course! But, we simply aren't required to study and be fluent in more than one language (like many other education systems around the world). Perhaps we are victims of our own success, we can function pretty darn well just by knowing English. This doesn't mean we don't respect or appreciate language, its just not as high a priority. And yes, we would love to have sexy accents so Gwyneth Paltrow would think we are better dinner conversationalists, but that just isn't in the cards...