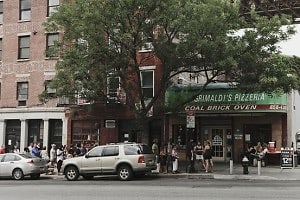 Famed Dumbo pizzeria Grimaldi's got served with eviction papers. Its owners owe $44,000 in rent and taxes, despite constant out-the-door lines at the pie mecca. The potential closure proves that even the most esteemed restaurants are vulnerable to sudden death, and is a good incentive to visit similarly vaunted eateries before they bite the dust.

Grimaldi's invariably comes up in heated discussions about New York's best pizza. It's become pilgrimage-worthy. Even Michelle Obama and her daughters had to stop by on a recent swing through the city.

The First Lady hasn't been spotted at the five restaurants below. But, like Grimaldi's,  they're all classics of very New York culinary genres.  They demand a visit before the wrecking balls arrive:

Katz's has some competition (Barney Greengrass, the Delis Carnegie and 2nd Avenue) for the title of best Jewish deli in town. But nothing beats an original, and Katz's, in operation since 1888, is the oldest of the bunch. Carnegie Deli might name its mammoth sandwiches after celebrities, but did its pastrami ever inspire a very convincing fake orgasm from Meg Ryan? Nope.

OK, no one is going to say that Wo Hop's food is the best Chinese in the city. And Shun Lee uptown rivals this glorious Chinatown dump in name recognition and kitsch decor. Still, Wo Hop, going strong since 1938, has its charms. It's open 24/7. It's BYO. And come 5am it's got one of the motliest crews imaginable huddled inside--a combination of off-duty cops and post-clubbing night owls that's the closest a restaurant has ever come to resembling a drunk tank.

One year older than Katz's, and currently enjoying its 26th year atop Zagat's "Best Steakhouse" list, Peter Luger has one of the most intimidating reputations--and, some complain, waiters--in New York. If you want to get on your server's good side, don't ask for a menu. Its options are pretty much limited to Steak for Two, Three and Four. You wouldn't want anything but the porterhouse anyway.

The West Side mini-chain refuses to dress its snappy franks up in anything more than mustard, kraut and relish, which is just the way fans like it. Besides, the lack of gourmet concessions lets Gray's Papaya offer its famous Recession Special--$4.45 for 2 dogs and a drink--which is available whether we're actually in a recession or not. Light on the wallet, and good for the head--the papaya drinks are prime hangover elixirs. 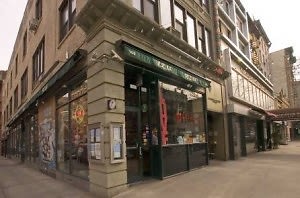 Outside of New York, it'd be sacrilege to consider a Ukrainian eatery specializing in pierogi and borscht as the best of a very American restaurant category. But, especially in light of a recent rash of diner closings, Veselka earns its stripes. Unlike most diners, the menu doesn't span the cuisines of 19 different nations. But the bacon cheeseburger is among the best in New York. And, as in any true diner, can be enjoyed 24/7.