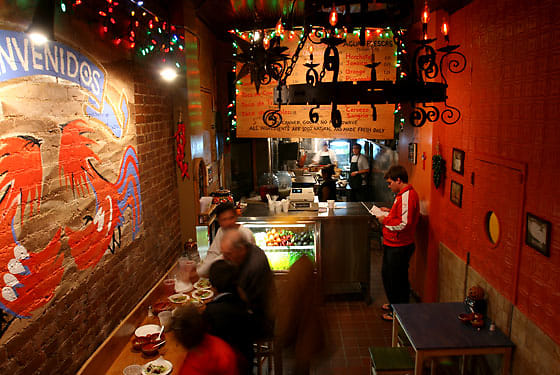 Are the days of La Esquina becoming more and more numbered?  Recent trouble coupled with hour sheer boredom of the place lead us to believe this may be the case.  The famed dinning spot with a shady cast of characters is certaintly not cause for concern for Jeffrey Chartier who, NY Mag is reporting,  just opened HIS own taco stop shop across the way at 277 Mott street (by Spring)...We aren't going to question what Jeffrey says is: "the first real authentic taqueria in New York City", as he is making sure that the even all meat is butchered on premise (the meat is chopped with a machete on an avocado-tree trunk).  What we are going to question is the naming of the place "Pinche".

According to our ever so trustworthy "Urban Dictionary", while Pinche CAN mean "the kitchen boy" in Spain, it more than likely refers to the all-purpose insult enhancer used in Mexico:

"It would be roughly equivalent to the use of *fucking* in English. If Jay (Silent Bob's hetero life mate) spoke Spanish, he would say *pinche* A LOT. Pinche is strongly associated with cursing in Mexican Spanish and the very moment you use it gives you away as a Mexican national. So you pinches gringos take that into account if youre trying to pass for an Argentine or whatever."

Pinche is also used in Mexico as an adjective to describe something as insignificant, lousy, miserable or worthless.  So, either he's literally giving la esquina the finger or telling the world he sucks.  Ah, Mexican Slang, leaving us scratching our heads once again...In any case, Jeffrey claims that "La Esquina is nowhere near authentic as far as I’m concerned.” Let the taco wars begin!