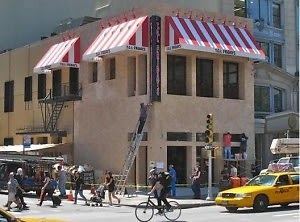 Union Square is getting some flair as T.G.I. Friday's moves in. Its trademark red and white awning is dawning, which some see as the area's umpteenth death knell. But it's actually a homecoming. And Friday's isn't the first NYC-based chain to bring the greasy, pesticidal chickens home to roost.

New Yorkers instinctively hate chain businesses and chain restaurants in particular. (Except for when they don't.) It's like people who come to New York and shop at Abercrombie: why bother when there are dozens of better (and often cheaper) one-of-a-kind alternatives nearby?

A generic national chain settling down in Union Square really gets people going for three reasons: the site's history as a place for activism and protest, the antithetical positioning of a grease pit a mesclun salad's throw away from the park's beloved Greenmarket, and the Square's nearly extinct role as a state of mind between staid up and freaky deaky downtown. (Andy Warhol's late career Factory was just across the park from Friday's. Can't you see him and Ondine there, noshing on wings?)

Here's what some Eater commenters had to say about it:

"f the malling and midwesting of New York Shitty. Thanks Bloomberg the nail is in the coffin."

"To me the big deal is come to nyc and it looks just like Cleveland (N.B. It's always, always Cleveland)...NYC used to be a place u needed to be in or you had to be tough enough to make it here. Now, it's the Mall of America."

But we should go easier on Friday's. After all, the monster was born right here in Manhattan. And it's one of a handful of chains that started in NYC, blew up all over the country and, like a deep-fried boomerang, came back to haunt and taunt us with hometown proliferation.

Here are a few of them:

T.G.I. Friday's: Alan Stillman opened the first Friday's on 63rd and 1st in 1964. It was cool enough to land a supporting role in Cocktail 24 years later, when Tom Cruise theatrically juggled liquor bottles behind its bar. The original location is gone, but luckily ten operational Friday's franchises keep its zany-costumed spirit alive in New York City.

Nathan's: An obvious one, and a New York-based chain that's hard to hate given the colorful history and glorious present of the 1916 Coney Island original. There are currently four Nathan's in NYC (a possibly inaccurate number, since the website omits the founding Nathan's from its store locating map) and no better place to witness inhuman hot dog gobbling than off the boardwalk every July 4th.

Sbarro: Sbarro, uniformly mocked by New Yorkers for its crappy pies, now has 1,043 stores in 43 countries around the world. But it all started with a couple of Neapolitan immigrants named Gennaro and Carmela Sbarro, who opened their first restaurant in Brooklyn in 1956. Current headcount: 1,064 locations, with 15 scattered across the five boroughs.

Butter: A small-scale example, but notable for introducing perceived exclusivity to chaining. This Lafayette Street resto-club standby expanded to Charlotte, North Carolina in February. A Boston offshoot is rumored to be in the works. And the whole operation will likely ricochet back to New York in, where else, the Meatpacking District. 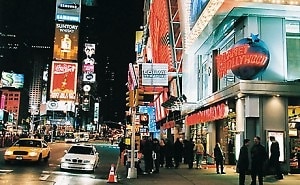 Planet Hollywood: One of the more egregious examples of chains birthed in the city due to its glorification of all things Los Angeles and, like a greedy studio head, premeditated franchising. Arnold Schwartzenegger, Sylvester Stallone and Bruce Willis, maybe anticipating their midlife decay and action star obsolescence, opened the first Planet Hollywood in 1991 on 57th Street, back when 57th Street swarmed with kitschy theme restaurants. A few years later Times Square became safe for places like PH, and it inexplicably survives there to this day.

On the other hand, New York has put its unique stamp on some chains that arrived in the city from elsewhere:

The Standard: Independent lounges, roof bars, beer gardens and restaurants make up The Standard's constellation of party places. But the Meatpacking District monolith is, of course, part of hotelier Andre Balazs's sprawling empire. I know that hotels (or at least luxury boutique hotels) are exempt from chain criticism, but sometimes I wonder why.

Also, Limelight took off in Hollywood, Florida and touched down in Atlanta before its New York facsimile became part of local lore. And look how well that turned out.