For the ultimate rock 'n' roll historian, here's a chance to own a true piece of rock history.  Rick Kelly, of Carmine Street Guitars (42 Carmine Street), is taking pieces from NY landmarks and incorporating them into instruments. 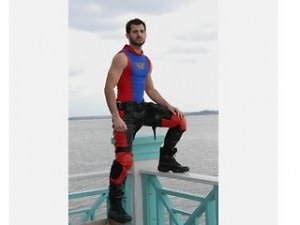 The building is no longer taking guests and is currently being gutted and renovated by a big real estate developer, presumably into a John Varvatos-style faux-rock nostalgia kind of deal (RIP CBGB). Gene Kaufman, an architect hired to oversee the renovations, told the New York Times that the plumbing, ventilation and electrical systems and the lobby all had to be overhauled, but the charm would be preserved, but we have our doubts.

Thankfully independent luthier Rick Kelly is keeping the building's incredible history alive in the most badass way possible: By making guitars out of trashed beams from the Hotel Chelsea and other old-school New York hangouts like the speakeasy Chumley's, former haunt of great American writers.

Bob Dylan apparently owns a guitar made with a Chelsea Hotel neck and a Chumley's body, reports DNAInfo, who has an interview with Rick.