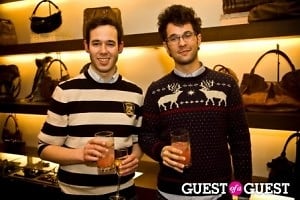 angelica and i get to the Guest of a Guest/Elle Magazine holiday party a few minutes early and we stand outside the Burberry Store in SoHo, where the party is, and try to decide if we would rather go inside and be the first/only people at the party, or stand outside and wait for other people to come, and freeze because it's like 25 degrees out. it's uncomfortable to be the first people at a party because everyone assumes you didn't have anything to do before the party, which makes you lame i guess, and you have to stand around waiting for other people to show up and praying that they get there soon so you aren't the only one anymore

eventually we decide to go inside because it's too cold. we wander around and look at the shoes. it's really bright inside. Angelica points out that the gladiator sandals they sell are not fashionable anymore but there is a pair of boots she really likes that are still fashionable. cocktail waiters walk around with black wooden trays of drinks and hors d'oeuvre and one hors d'oeuvre i eat is a tiny piece of beef wellington and it's succulent. i can't wait to tell my friend nate to try the beef wellington when he gets here. i've been watching a lot of Food Network lately and i feel like this beef wellington could be on it. i try a pink vodka drink, very sweet. then i try a piece of cold ground fish with some cream and a piece of apple on top and it's not as good as the beef wellington but still pretty good. it tastes like exactly how you'd expect a gourmet cold lump of fish to taste i think

then it's 7:00 and people start showing up!! thank god. i tell angelica that writing about the Guest of a Guest party for Guest of a Guest presents a weird problem, obviously, because what i write should be honest and not just flattering so it doesn't just seem like i'm plugging the party for this website i write for, but also it would be weird to write something unfavorable about the party. LUCKILY THERE'S NOTHING UNFAVORABLE GOING ON so i don't have to make that choice. i am having a good time at this party so far

now it is later and there are a lot of attractive people here. sometimes it feels like a lot of pressure to be surrounded by attractive people because, you know, you want them to think you're attractive too. whereas if you're surrounded by ugly people, like at the DMV or when you go to vote, who cares if those people don't think you're attractive? and you don't have to suck in your stomach and stand up straight, you know? i think i am revealing too much now so i'll stop

my friend mallory walks in and she is with her friend who is an actress on the MTV show My Life As Liz (or My Life Is Liz?) and we talk about what we did when the blogging platform Tumblr was down this week

the TV actress says she masturbated a lot, and also smoked a lot of weed. i think she was joking about masturbating a lot but i'm not sure. after she says she smoked a lot of weed she says, "i'm a role model" and makes air quotes with her fingers when she says it. she says she Googled herself a lot and then says, "there are a lot of pictures of her in a bikini on the internet!" i really like listening to her, i think she gets a kick out of being a sort of famous TV actress and it's fun to hear her talk about it because she's not self-serious about her moderate fame

now there are a lot of people here and it is packed. the editor of Elle Magazine is here. angelica says everyone identifies her by her angular bleached hair. a few feet away from me, the editor of Elle is talking to a man in a blazer and she looks at him so intensely when he's talking to her, her eyes dart around his face like she's concentrating and trying to memorize everything that's happening on his face. she looks really focused and determined

i grab another pink drink and then i see my friend Nate and we talk for a minute and then this publicist who i have met like literally at least 4 times comes up to us and says hi to nate and then introduces herself to me. i resist the urge to say "we've already met!!! and i hate you for not remembering that!!!!!!" and i just say "hi it's nice to meet you i'm david" and we shake hands

now it's later and i've had a lot to drink. this is a much better holiday party than the holiday party at my office because i couldn't get drunk at that one, and also everyone here is fashionable and good-looking

my friend Mallory and the TV actress are about to leave and we are standing by the exit with them while their other friend grabs her coat from coat check. the TV actress says, to the circle of people we're in, "do you like this?" and she opens her jacket to reveal a lacy black blouse that you can see through and you can see her bra. then she says "my DAD picked it out!!!!" and everybody laughs. she's very charming

a cocktail waiter walks by and offers us little apple tarts and we take them and he says, like, "you guys are reliable" or something like that, and then he smiles. i don't like when the cocktail waiters point out how many hors d'oeuvre you are eating because nobody wants to feel like a fatass. that's my last hors d'oeuvre tonight!!!

then the party is ending. Rachelle from Guest of a Guest and the editor of Elle are saying goodbye to people as they leave. waiters are walking around with little chocolate/caramel things, and then the music stops playing over the loudspeakers, and angelica says "you wanna get out of here?" and i say "sure" and then we leave. that was a nice party Sent via BlackBerry from T-Mobile