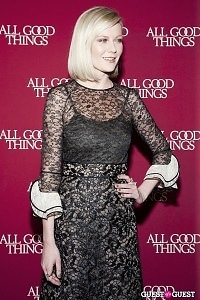 Our infamous BlackBerry blogger hit up the "All Good Things" afterparty at Buddakan last night. He takes us on a rowdy romp through the cavernous, multistory restaurant as he vaguely interacts with Kirsten Dunst and Kristen Wiig. His account, as tapped in situ on the small BlackBerry keys, lies below:

i am standing up against a wall in the basement of the restaurant Buddakan on 9th avenue for the afterparty of the premiere of the movie All Good Things starring Ryan Gosling and Kirsten Dunst. i was thinking about seeing the movie tonight because i was allowed to go to the screening but i couldn't make it but now i wish i had seen it because i feel out of the loop at this afterparty. i wonder if everyone here is talking about the movie and they have to say they really loved it to each other because they're at the afterparty for it, even if they didn't really love it at all, like the Seinfeld episode where Jerry and Elaine see their friend's baby and have to tell her it's a beautiful baby even though they privately agree it's ugly

ANYWAY kristen wiig and kirsten dunst are supposed to be getting here soon and hopefully i'll interview them, but before they do, i'll tell you that this restaurant feels like a maze and there are tables set up all over the maze where people are sitting and eating their buffet dinners. the lighting is dim and the rooms are like caves. a sad-looking waitress just walked past me carrying a tray of champagne and red bull. the people here look really glamorous, i guess that goes without saying, and the men look like they are in John Varvatos ads and like most of the women here are taller than me and i'm 6'0"

i go upstairs to the lobby area and Kristen Wiig just got here. she is talking to someone, and as the other person is saying something, Kristen Wiig closes her mouth and you can see her tongue moving along her teeth inside her mouth because she is trying to get lipstick off her teeth without using her finger. i've seen my mom do that before. and after kristen wiig finishes talking to the person she's talking to, she rushes to a different part of the restaurant before i can talk to her 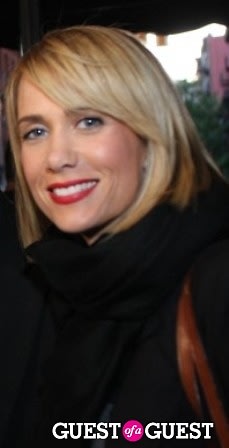 but then i catch up to her! i go up to her and say "hi my name is David and i write for the website Guest of a Guest, can i ask you four very fast questions please?" and i hold up four fingers in case she couldn't hear me. and Kristen Wiig looks agitated and says "can you give me a little while? i just got here -- just come back, i'll be here" and i shrug and say "okay" and walk towards the bathroom. i want to explain to her not to be mad at me, her job is to be in movies and on TV and my job is to ask questions to people who are in movies and on TV so she can understand why it's my responsibility to pester her, and also i don't know what the difference between her answering questions now and answering them later is but okay

and then as i am standing against the wall near the bathroom, waiting for Kristen Wiig to get comfortable, a girl with brown hair who i have never seen before, and who is also alone, comes up to me and says "so... what'd you think of the movie?" and i say "i didn't see it" and she goes "you're just here for the afterparty?" and i say "yeah" and she asks if i want to hear a secret but i can't tell anybody, she looks so excited as she asks me, and i say "sure" and she tells me she snuck into this afterparty because she found a ticket to the movie premiere on the ground outside the theater and then used it to get into the afterparty because your ticket to the movie is also your ticket to the afterparty, i guess it says that on a ticket

she asks what i am doing here and i say i'm reporting on the party for Guest of a Guest, she asks if i go to a lot of parties, i say "i guess so, i don't know how many 'a lot' is?" and she says "me too! me and my friends crash parties like this all the time -- i actually use your site to find out what parties are going on every night to crash them!!!"

and then we talk for another minute and i look at my phone and realize it's been 18 minutes since Kristen Wiig told me to come back so i excuse myself and walk back over to Kristen Wiig. she is standing in the same spot and her boyfriend is standing in front of her and he has his hand over her shoulder and it looks like they are having an intense conversation so i wait around in the corner until they are done

a few feet from Kristen Wiig, Kirsten Dunst is standing next to a table where some of her friends are sitting. she looks really happy and she is doing that dance where you push your palms through the air in front of you, like raising the roof but horizontally. the publicist said she was just there to relax, and not do press, so i can't interview her (or i could but it would be against her will). but i can tell you, in lieu of an interview, that one time i was DJing the afterparty for a Vampire Weekend show at a hotel in Manhattan and Kirsten Dunst was there and she came up to me and requested American Girl by Tom Petty

eventually Kristen Wiig's conversation reaches a lull and i tap her on the shoulder and she turns around and i say "hi i wasn't sure how long you wanted me to wait before coming back to you so i figured now would be as good a time as any, you know?" and she looks unenthused and waits for me to continue, so i say "okay -- do you read your own Wikipedia page?"

she thinks about it for a second and says "well i don't tend to go on the computer that much.." and then a smaller woman walks over to us and stands between me and Kristen Wiig and looks at me and says "hi i'm from Magnolia, she's just here to CHILL, not to answer questions..." and then Kristen Wiig says, over this woman's head, something about how she has friends who check her Wikipedia page who will tell her if there's something wrong on it. and then i thank Kristen Wiig and then i walk back to the corner and stand against the wall and finish writing this thing Sent via BlackBerry from T-Mobile