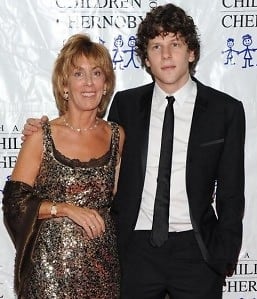 We sent David Shapiro, our intrepid, Blackberry-wielding reporter, to the tundra of the "Children at Heart Gala" at Pier 60 last night. His tale, harrowing as it may be, will take you on an epic journey through his evening at Chelsea Piers.

His unedited account, as punishingly tapped on the small keys, is below:

i am in a huge ballroom at a Children at Heart gala for Chabad's Children of Chernobyl, a charity that helps children who were affected by that accidental nuclear explosion in the U.S.S.R. in 1986, and i am drinking a cocktail made with tequila and apple juice and agave syrup. it's pretty sweet and it tastes like children would like it which i guess is perversely fitting

when i got to this gala, one of the publicists showed me around the ballroom and told me about the silent auction they are having here tonight, one of the items you can bid on is an unpaid internship with a film company. and she also mentioned that her publicity company represents the brand of tequila that's sponsoring this event. now we are standing together in the corner of the room waiting for Whoopi Goldberg and Jesse Eisenberg to arrive and she just leaned over to me and said "YOU BETTER WRITE ABOUT THE TEQUILA" and i looked at her and she was giggling so i think she was joking but also i think she wants me to write about the tequila 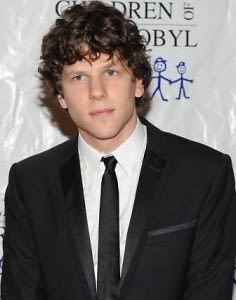 and then i stand back up, and between me and jesse eisenberg there is a different woman who looks and sounds like one of the moms from my town, like she's talking to jesse eisenberg with this suburban jewish mom accent that’s like a brooklyn accent but delivered in chirps, and she looks at jesse eisenberg and pulls this teenage girl out of a pack of girls and says “this is my daughta!!!” and she starts talking about her daughter and the girl is standing there looking nervous

and jesse eisenberg looks over at me and i am smiling a lot because i am witnessing something surreal, like this woman is trying to set jesse eisenberg up with her daughter at this gala for children affected by an unintentional nuclear explosion and i’m just taking the whole thing in, and then he starts smiling too because he knows i am smiling about this woman, and i guess if you are in a weird uncomfortable situation and there is nobody around to agree about how weird it is than you just suffer through it but if there’s someone else there who gets it then you can smile about it

anyway so then a few minutes later, jesse eisenberg’s handlers clear a path through the pubescent girls for him to go take a picture with the DJ and i catch him near the DJ booth and i go up to him and say “so have you listened to My Beautiful Dark Twisted Fantasy [the new Kanye West album that came out today] yet?” (i write a blog that's partially about a music reviews website that gave that album a 10.0 and it hasn't given a 10.0 in 8 years, so that album is on my mind right now) 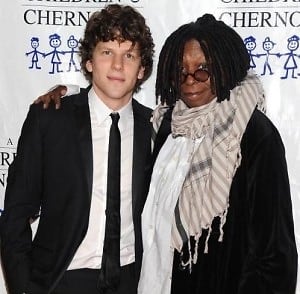 then Whoopi starts walking towards the doors to come inside and i line up just past the doors next to reporters from The Washington Post and Life & Style. while she is talking to the Life & Style reporter, she looks at me and says "i have to hold on to you for a second to fix my shoe" and i say "okay!" and then she puts her hand on my shoulder and picks her leg up and adjusts her shoe and supports her weight by holding on to my shoulder and then she finishes doing that and answers other reporters' questions

and as soon as i ask the question i get worried that people might think it's weird that i am specifically asking a black woman if she had listened to a recent popular rap record and i want to say "no no Whoopi, that's what i'm asking everyone tonight!" but then she just laughs and says "no, not yet" and i say "are you planning to?" and she says "yes!" and then i say "okay that's it!" and she looks surprised and i thank her and walk over to the bar and get another one of those cocktails and then dinner starts and the reporters aren't authorized to report on the dinner so i left Sent via BlackBerry from T-Mobile