The New York Times has finally realized Alexa Chung exists. Sadly the Styles piece this weekend about Chung is notable for all the wrong reasons: it endeavors to discover the already notable model/TV host and proliferates the onerous term “’It’ Girl.” Please, if you’ll spare us a moment of close reading…

The peg of the piece anticipates Chung’s upcoming PBS reality show “Thrift America” about shopping for vintage clothes, but the actual nut-graf (nut-job?) premise---that Chung may be the most famous person Americans have never heard of—is a contrivance to give the article narrative legs…and disingenuous ones at that. The piece's writer, Stephanie Rosenbloom, seems to have stuck to the grandiose belief, that no doubt infiltrated her pitch, that she was unearthing an underground celeb, a marginal character with get-big dreams. This faux-eureka was also something of a problematic issue in last week’s New Club Kids article.

If we are all for the continuation of these hyperbolic claims, let's make yet another assertion in that spirit: the “’It’ Girl” categorization (the Times strangely puts quotation marks on the neuter pronoun and not the entire phrase) may be the most convenient bromide ever—made empty from overuse and lack of specification. What does “’It’ Girl” actually mean? Would it be cavalier of me to suggest a moratorium on this catch-phrase in our journalistic parlance? Besides its identity as a ready buzz term, what actual significance does "'It' Girl" take on, and what are the parameters to reaching this status? 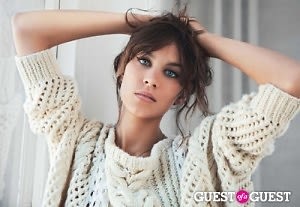 As a result of these unanswered (and perhaps unanswerable) questions, in a sense, the article plays out like an “’It’ Girl” Mad Libs exercise.

The article is bookended by a “burrta caprese salad…and a coke” interview with Chung at the Bowery Hotel, but the true premise of the piece seems to have been constructed independently of that meeting. The writer, in a way, could have penned the article without ever meeting Chung, just filling in the blanks of her hackneyed conception of the 26-year-old.

She is the apotheosis of the '_____' [insert singular neuter pronoun] Girl.

This is not to say that Chung is not an interesting character within the world of fashion. She’s set apart from the usual set in her field because of her androgynous fancy for male bags and identity as, in the Times description, the “antithesis of the warrior goddess look of Beyonce and Lady Gaga.” Yet, she’s been mainstream for quite some time, having helped to design a collection of J. Crew’s Madewell and having appeared on the British editions of Vogue, Elle, and Harper’s Bazaar. The article presents a dichotomy between Chung’s notoriety in England and her alleged under-the-radar U.S. stint in spite of her MTV show “It’s On With Alexa Chung.” This strikes us as a glaringly erroneous assertion given Chung's recognizability and the extensive press coverage she has received, even stateside. The Times is late to the party on this one or trying to muster a raison d'être for the piece through a distorted lens of what's new and en vogue. This is the Styles section, right?

_ One interesting aspect of the article is the focus on fan blogs Chung's charisma has spawned, such as iwanttobealexachung.tumblr.com. Instead of zeroing in on Chung's “’It’ Girl” status, it might have been more appropriate and inventive to talk about the "hagioblogular" allure of this creature, one who attracts Girl Crush homage sites and earns fame and reputation in that grassroots manner.

Of course, as we’ve been noting for some time, Chung is a paragon of self-branding, and these types of people become excellent fodder to fill in the columns of the Styles section as the pop culture machine regenerates and too slowly churns out new material; the Gray Lady in the meantime bides her time convinces herself she's has come up with a worthy story.