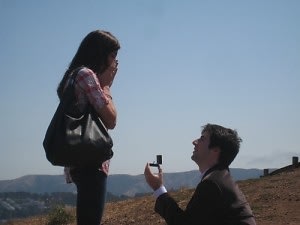 We had to read this proposal story about three times in order to keep the sequence of social media straight (wait, FIRST he updated his foursquare, THEN he tweeted? Or vice versa?), but once we did, we thought this story was totally sweet!-

Matt Van Horn, who works for Digg, proposed to "the woman of his dreams" this weekend.  It was pretty complicated.

FIRST: He pretend flew to New Orleans. (We don't get this part...is it so she'd think he was out of town?) 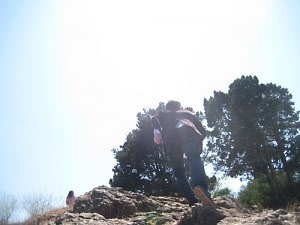 NEXT: He lured her to their favorite lookout spot with promises of a puppy. (Seriously. He should have proposed to her, AND given her a puppy.)

THEN: He hid behind some rocks. (Vital to any successful proposal.)

NOTE: His friend was ALSO hiding behind some rocks, LIVESTREAMING the whole thing. (If this type of behaviour doesn't get you arrested, I don't know what will.)

FINALLY: He checked into the park via Foursquare and tweeted to his beloved to "turn around" (again, creepy? no? just us?), at which point he proposed. We can only assume his friend followed him OUT of the rocks to catch the whole thing on camera.

We tease, but the video is pretty damn adorable. He looks genuinely nervous squatting behind those rocks. Also, the guy who filmed it is either panting really loudly after scrambling up the rocks, or sobbing.