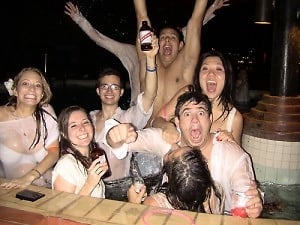 [All pictures by Nick McGlynn from Thrillist] We sent GofG Correspondent Carson Griffith on the Thrillist Mystery Jet, armed only with her passport and a sense of adventure. She had no idea where she was going, or who with. This is her story....

"Let's get weird!" Ben Lerer yelled over the micro-phone for his first speech to us. The CEO of the company that now employees over forty people looked like he was determined for all of us to have a good weekend from the moment we got there (game face, anyone?), as did his employees. What can be said? Thrillist.com knows how to throw a party. And this is coming from a person some may call a bonafide party expert - I've been to more events, clubs and gatherings in the past year than some people go to in their lifetime. But the execution used in putting together Thrillist's JetMystery trip - a weekend get-away for a group of 150 media, press, public relations, advertisers and contest winners - was practically flawless.

From the time we arrived at JFK airport at the Jet Blue terminal and were greeted company's employees relentless 5am cheeriness and matching t-shirts despite the early hour, I was pretty damned amazed at what they put together. I didn't even KNOW you could convince an airport to hand out tickets to a group of travelers that didn't say the destination before even going through security. When Rachelle told me three weeks ago I would be representing GofG at this "social media summer camp", I could only vaguely imagine what I was getting myself into: boarding a plane with no one I knew and going to a mystery destination I wouldn't find out till I got to the airport, with the notoriously hard-partying boys of Thrillist. 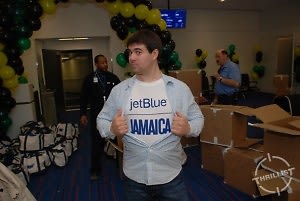 After finally making it to our gate, instead of being greeted by the check-in stand, we were finally told where we would be headed... with a gigantic banner, an archway of Jamaican-colored balloons, and a steel drum band. Yes,

a steel drum band. At the terminal. at 6am. That's one way to keep everyone awake.

Or there's another way... Once actually boarding the plane, by the time the clock hit 8am, flight attendants were encouraging passengers to partake in an early morning Red Stripe beer - a sponsor of the trip. I wish I could say I witnessed a shotgun or too, but unfortunately glass bottles aren't exactly the most accommodating for plane ride collegiate activities.

So Thrillist has the surprise welcome, the steel drum band, the in-flight beers before most bars are even serving in New York City - but if all these aesthetics don't impress you, it's the little things that will. Like our overstuffed gift bags on our seats, filled with t-shirts, sunglasses, and gifts from the sponsors - POM, Coldeeze, Sky, and Trojan (whispers at the pool-bar later confirmed more than a few Jet Mystery travelers put THAT free gift to good use. But hey, we were in Jamaica, right?). Seat assignments were strategically planned based on the outlet you were with (my seatmate from BuzzFeed and the Huffington Post conveniently knew Rachelle previous to this trip, the other was with the Onion), as were hotel assignments - best part about being a brave soul traveling alone was I got an entire suite to my self.

e cracked up to be. Lucky for us, Team Thrillist took a scouting trip to the Iberostar Rose Hall in Montego Bay, Jamaica, where we stayed, pre-Jet Mystery, to make sure they knew what they were getting us into, and that's probably how I ended up spending two nights in a suite on the beach with a balcony and a personal butler. Each room had one. Mine was named Dennis. I kind of miss him (and him giving me directions when I got lost on the huge resort). 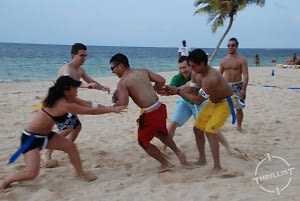 But to make sure the trip wasn't just 150 guests plopped down on beach chairs for two days, the Thrillist crew made sure to keep us on a tight itinerary. I'm talking military camp style. Our first day alone included a beach BBQ, touch football game, cocktail party, dinner, bonfire, and discotheque (yes, I said discotheque).

By the way, I am still recovering from this supposed "touch" football game. Apparently, media people - and Thrillist employees - take their beach sports very seriously, and while I took a facedive... or two... to the sand, I have the leftover wounds to prove it. And they have the video footage as well.

The hotel may have provided us with great entertainment in the form of Rhianna dopplegangers in barely there dance costumes, but the real entertainment was at the "discotheque". The hotel's club was perfect for consuming the copious amounts of free alcohol provided by the mandated wrist bands we had to wear all weekend. It was also perfect for the ridiculous dance moves you could spot on the dancefloor. If you think a group of frat boys fist pumping is a sight to see, than you've never seen a group of media kids during their interpretation of the same dance move. Or television producers during the robot. Or Ben Lerer basically leading the movement. 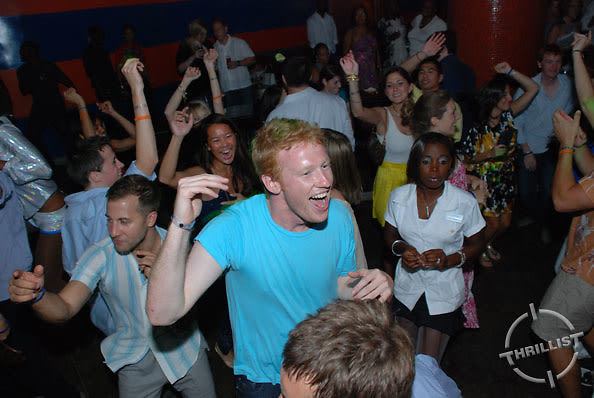 And when there's no more energy in a group of people left to dance what do you do when you're on a Caribbean Island, with a large group of hot-blooded adults? Well, go skinny dipping of course. Or at least that's what a pack of Jet Mystery travelers did when they were on their last dance move. (Sorry ladies, the recently married - as of last week- and well behaved Ben Lerer was not one to de-robe). Whoever said press people don't know how to have a good time?

An alternative to leaving your clothes on the beach is 24 hour room service. And while they may not be willing to bring you Dom Perignon, they'll still pony up the goods at anytime ("Ok then... bring us a bottle of your finest free champagne" -Justin from Refinery 29). 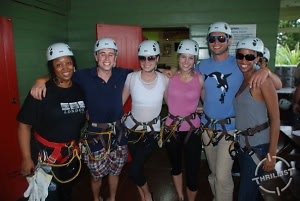 Surprisingly enough, people were still able to drag themselves out of bed for Sunday morning's excursions (there obviously had to be planned day trips at "Social Media Summer Camp"). They might want to give credit to another one of the trips sponsors, Starbucks and their instant coffee VIA, because it certainly wasn't due to the Starbucks cocktails everyone was downing the night before. For excursions, the options were dune bugging (filled up right away, and besides, I don't have a valid driver's license), horseback riding (the thought of riding a horse after a night of drinking at 8:30am did not seem too apealing), or zip-lining. Flinging myself through the Jamaican rain-forest it was.

After driving in an open air jeep over rough terrain, I was whipped around on a harness with a big crew o

f people including Buzzfeed's Jessica Amason, Thrillist's Flavie Bagnol and Adam Rich, and photographer Nick McGlynn who was sure to document everyone's fear (or love) of heights. Still - it was definitely worth it for the amazing views of the island.

While people spent the rest of their afternoon at the pool bar and the sauna, I snuck off to do some work (i.e. nap). With the night ahead, it was probably the best decision. Even though we weren't told where we were going initially, as time went on we were given more and more hints, with a final list of things to bring including a white outfit for a White Party (no, Diddy was not there). After being chartered to Sandals Resort down the road, we were put on boats and taken across the water to a private island called Sandals Cay - otherwise known as the real Kokomo. 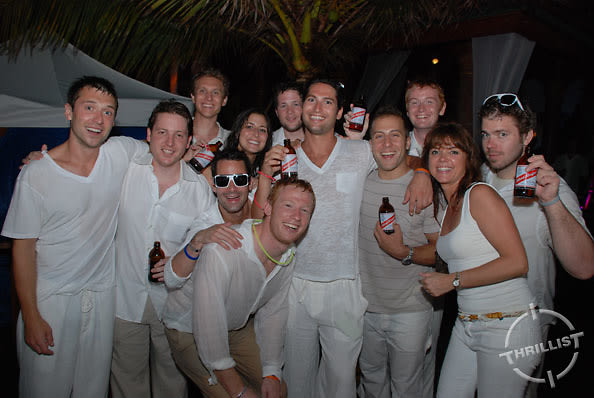 With three bars, a martini station, and over six tables of food, it was quite the elaborate spread. There were performers, and appetizers, and the whole she-bang. Tiki torches, and views, and a dance floor. It was kind of like a destination wedding, with Thrillist doing the planning (that would make Ben Hindeman the wedding planner). 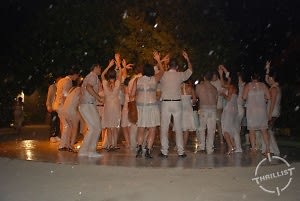 Unfortunately, not everything is always perfect in paradise. Just luckily for Thrillist it's not their fault (and for us as well - we did, afterall, sign our lives away to them on waivers before the trip). A rainstorm mid-Island party left the dancefloor, the food tables, and many of the party patrons soaking wet. But apparently it did more than that - it also soaked the sand where the light scaffolding was. The light scaffolding that the Sandals resort didn't sandbag, causing it to crash down on the dancefloor and land on top of six travelers (including the famous "Obama Girl", otherwise known as Amber Ettinger). There were some bumps to the head, a fractured collarbone, but really more than anything, there was worry. But by the time medical help arrived, those injured were making attempts at jokes and seemed to be stable. Regardless, Thrillist made sure the best precautions were being taken, and CEO Ben Lerer stayed with two of the guests at the hotel for an extra night while the other four traveled back with us yesterday. A glitch in a perfectly planned weekend, but luckily no one is seriously hurt - and knowing this, the party continued back at the hotel, even if half-heartedly... There were still fist pumps to be had, shots to be taken, new friends to flirt with, hot tubs to swim in. Two nights is not a lot.

So what do you get when an online media site throws together a group of people who mostly don't know each other? All in mostly related fields? A bonafide sh*tshow, but in the absolute best way possible. Because what better way to make a business connection, find a new job, gain a new opportunity, then over a cocktail? What better way to make a new friend than on a spur of the moment Caribbean vacation? 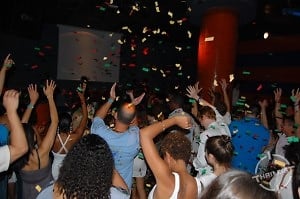 o ask them if "Do you like to party?" was a question on their job application. Ben Hindman for doing the event planning for the weekend, Flavie Bagnol for the girl talk, John Wiseman for the fist pumping, Ben Lerer for letting me sass him occasionally, and Mike Smayo (a.k.a Michael Cera) who may have taken back a little bit of my heart with him to San Francisco. Also thanks to Nick McGlynn for the endless amounts of pictures he took unless I find out he took some really awful ones of me.

And obviously the trip was populated by more than myself and Thrillist employees, and contest winners. Also taking part in this whirlwind weekend was Kurt Soller from Newsweek, Evan Orensten, the founder of Coolhunting.com, Mike Albo from the New York Times, Naomi Piercey from Women's Health, Jessica Amason from Buzzfeed and the Huffington Post, Justin Stefano and Phillippe von Borries, the founders of Refinery29.com (Justin I still owe you for "fixing" my shoe), Courtney Scott from Abroad'r View, and the multitude of other people I'm not even touching upon who have been continuously tweeting and Facebooking the ridiculousness squeezed into sixty hours.

So besides thank you, and I cant wait for next month's Jet Mystery reunion Thrillist already has in the works, really the only thing I have left to say is... where are we going next year? 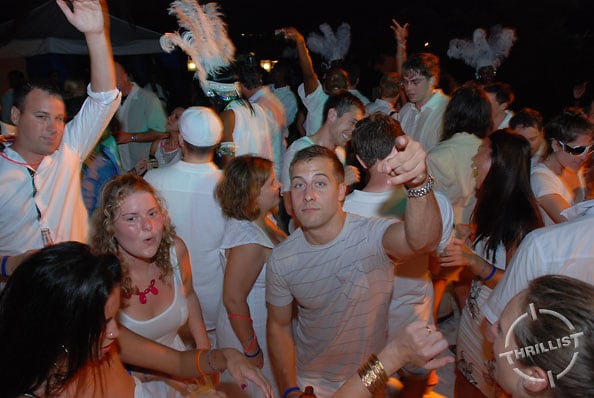 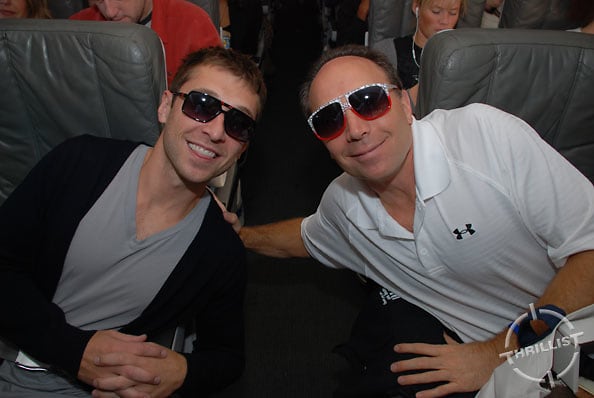 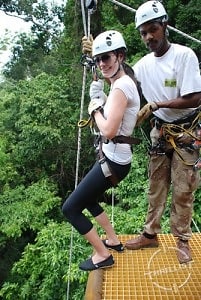 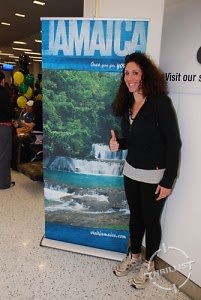 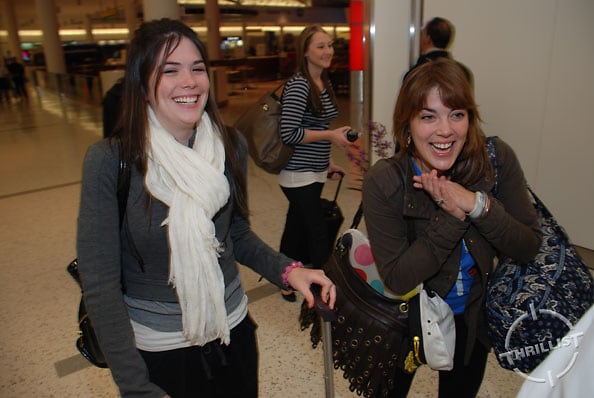 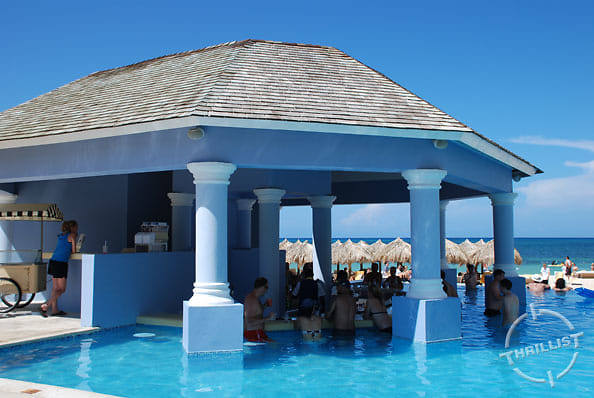 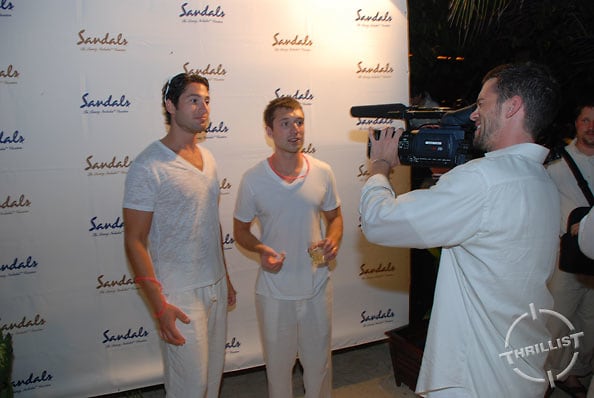 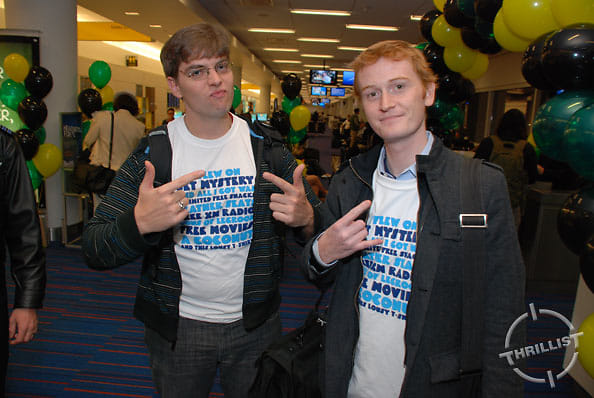 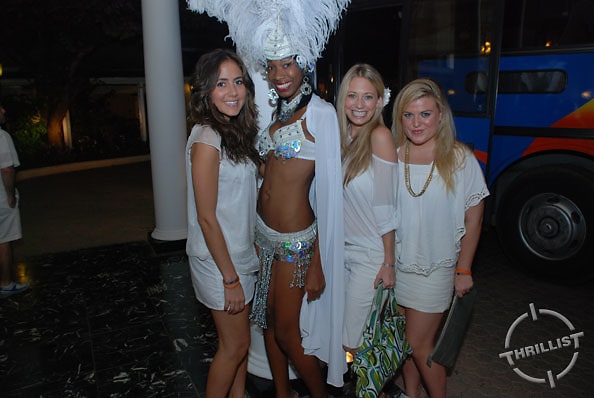 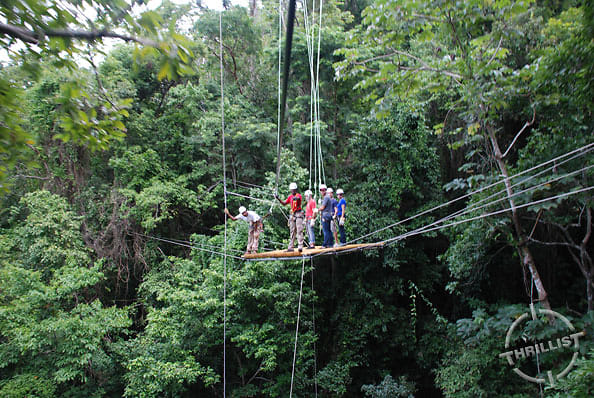 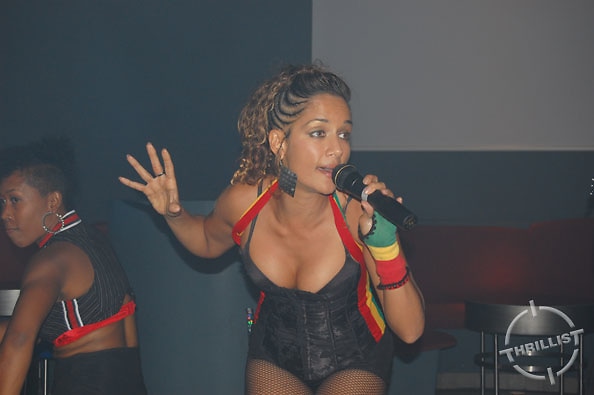 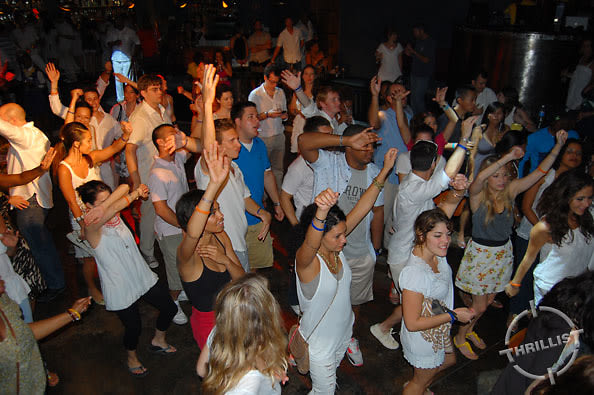