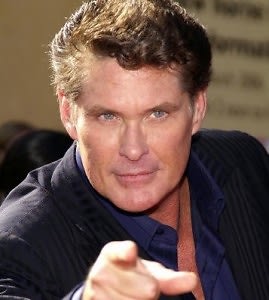 The Hasselhoffs, A&E's original Real Life series about David Hasselhoff and his two daughters, premiered last night and presented a raw, up-close-and-personal view of the TV star and his many afflictions.

To Hasselhoff's credit, he is not afraid of addressing more delicate and embarrassing moments in his past such as the infamous burger incident, during which he drunkenly wolfs down a Carl's Jr. burger:

But in a sense, these imperfections make up the cult-of-personality Hasselhoff has tried to imbue throughout his career, a strategy condensed in the mock-virility of the trailer of a hairy-chested toddler strutting down the beach in Mitch-esque Bay Watch fashion. The tagline: "Some People Are Born Awesome." This is to say, the Hoff's exaggerated attempts at beast-like virility are either so idealized as to be risible or so botched as to be somehow charismatically self-effacing.

Indeed, even when Hasselhoff is not awesome--such as his under-achieving performance on "Dancing With the Stars" for which he gave an early-elimination go to the song "Sex Bomb"--the stilted movements and laughable lip-syncing can be trumped up to the general ridiculousness of his aura. He's more caricature than character.

The burden of celebrity ("It's a hassle to be the "Hoff") and the struggles of being a single dad to two girls feature prominently in the story line of the new reality show. Taylor-Ann (20) and Hayley (18) appear preciously privileged girls who, cloistered within their father's white manse, who have nothing to worry about besides making $1,000-bets with the Hoff over who can give up caffeine first (they have a mattinal taste for Red Bull). The two are aspiring actresses, and this show seems a sort of strategic launch-pad for their careers by giving them exposure in this sort of vacuous entertainment.

A big coup for the family naturally comes in the first episode when Hayley snags a spot on a show about overweight teens at fat camp.

The highlight of the show comes in the Hoff's narrative, stream-of-consciousness voice-overs sprinkled throughout the show that beat bizarre-o paths through his wandering mind.