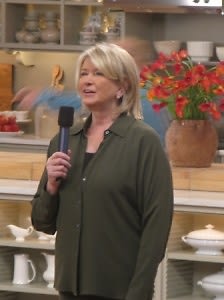 So this morning under my own volition, I attended The Martha Stewart Show. In case you never have the experience (of being one of four men in the audience) yourself, I wanted to provide a few observations about the happenings and the secret code of conduct, especially when Michael Kors comes to visit.

Let's say (and this is completely hypothetical) your girlfriend signs you up for talk shows every once in a while, just because adding an extra email list increases your chances of nailing a time slot. She assures you there will be prizes, especially in the weeks around Thanksgiving and Christmas, so you oblige her. The morning of the show, she tells you to wear solid jewel tones or pastels, because those asked-for hues will gain you prime seats for on-camera time. You cannot follow her request, because you always wear this plaid tweed blazer you got at Nearly New in Princeton, NJ. You will not have a pad handy, so you will write your observations in a copy of Richard Yates that Tao Lin gifted you. 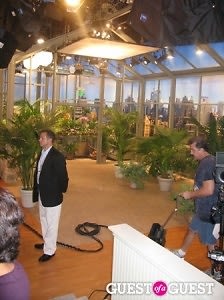 When you arrive and check in on 26th Street, you are, in a sort of Brave New World manner, categorized into sub-divisions: green, orange, and blue. There's no discernible difference between categories, but people will theorize about the pulchritude of people in certain categories. I myself found the selection process to be linked to dominant clothing color, such that people wearing, say, purple were seated next to each other.

A surly producer named Lois will give you name cards, and then Joey Kola, the warm-up guy, will come out and give some cheese ball comments. He will go to the side room into which extra audience members spilled over and stage whisper that he likes them better. People will titter. His job is to raise hype, and people will go crazy when he says there'll be some generous gifts. He blinks a lot, exaggeratedly. He will say that he has a tendency toward nictitation when prizes abound. If you don't clap then, because you're drinking coffee, you will get a look of reprimand from your girlfriend. Enthusiasm will be key, young buck. Joey will then instruct you in the signs for the three Martha Stewart Show audience member cues: clapping, yumming, and awwing.

When you enter the set--comprised of a kitchen, craft shed, potting area, and green house (behind which is a kind of silly mock-up of the New York City skyline)--you may be pumped up by the song "Learn to Fly" by the Foo Fighters.

Then a second Joey will join the first Joey and will joke about how the audience is "the best crowd we've had all morning." Then the first Joey will go around, as the song "Mr. Brightside" by The Killers plays, asking where people are from. When people say "Minnesota," he may joke that he's not going to discuss Brett Favre. When people say Long Island, he will speedily recount all the stops from Penn Station to Babylon including a transfer at Jamaica. He'll joke that Charlie Sheen won't be there. "He'll be somewhere," he said. When he looks at a row full of people wearing glasses, he may say, "What is this, the Pearl Vision Center?" (Zing?!). People will tell him they're from Australia, and he asks them if they've ever been to an American TV show. They tell him Letterman, and then Joey says, "Then you know it's customary to tip the warm-up guys 20% of your annual income." People will laugh. You will not. Your girlfriend will elbow you in the ribs. You have a better chance of getting prizes, you well know, if you're enthusiastic.

He will then go, "Aussie, Aussie, Aussie," and the Australians will go "Oy, Oy, Oy!" (kind of like a chorus of yentas). The Aussies will love him and say he should get his own show. He will like the idea of that and will get excited (one will feel great pathos for the goateed squat man and his salty sudations). He will say the problem hinges on the fact that there are too many Joeys in the U.S. Then he will say there are too many joeys Down Under and will hop around like a kangaroo.

When people do laugh, Joey will say that at least they don't have a scary audience laugh. He will talk about his Italian grandfather who would black out, cave in, or throw up. "I stand in front of him goin', 'I don't know if he's gonna die.'"

He will talk more about give-aways to raise the hype and even will take some girl's poor back and offers it around the audience. He jokes that he'll toss out light bulbs and Swiffer Sheets.

Joey then will get excited, because Martha's in the kitchen. Jennifer Lopez's "Let's Get Loud" will then play.

Martha then will come out and tell Joey that he still owes her four days of labor-intensive work (she will joke he promised her five last Christmas and only gave her one. She will say they get compounded and accrue interest; she will tell him that she expects the same gift this years and that they "don't expire.")

Later as the show is set to begin, Joey will sing, "Michael Kors in the kitchen with Martha."

Michael Kors is dressed in all black and has come prepared to make his Grandma Bee's pineapple upside down cake. Grandma Bee was a junior high school principal, he will say, but "glama" and "really Martha."

They will go to bake the cake.

"We already creamed," Martha will say.

"We already creamed," Kors will say.

Martha will ask how Michael Kors managed to be hugely successful even in a down economy. Kors will attribute it to a versatile quality to his clothing. Martha wears an olive green Kors number. They will continuously joke how she doesn't want to mess it up with the batter. Kors will then say, "I wear all black, which, as you can see, works well with flour." He will say they're making "a dietetic dessert." Kors will admit to having practiced making this dish before doing it live on national TV.

"It was divine," Kors said of his cake. "I was gonna be Martha-ready."

Martha will ask if he had friends help him.

Kors will joke, "No, I inhaled the whole cake." He had a dinner party, you will gather.

Martha will tell Kors that pineapples come from Brazil originally, that they are a new world fruit.

Kors will huh, in a gee-whiz kind of way. He says he sets the oven to 325 degrees. As they mix some butter, Martha says that Thomas Keller calls this "schmeer."

"You know what I call this?" Kors will inquire. "Fattening."

The audience will crack up, and Joey will conduct the audience to a heightened applause and fade.

Kors will say Martha's skirt is "schmeer"---"cashmere." He will say that this reminds him of how he describes colors as "ishy"--z.B. "greenish." 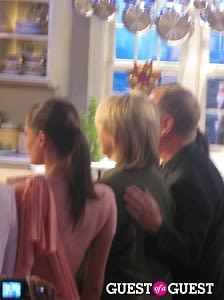 When Kors goes to flip the cake on the pan, he will use warmers. Martha will say it's probably not that hot. Kors will say that women have "asbestos hands."

Later a baker on the show named Thomas Joseph will make ice cream. You and your girlfriend (and the entire audience) will win DeLonghi gelato maker. You will also get spices in a cool wooden box. Then you will see a Michael Kors fashion show. Kors will says that this fall every woman needs a camel coat and a luggage-y tote bag that's sort of Grace Kelly gone downtown.

Martha will advise some woman against brining her turkey two days ahead of time. Martha advices against keeping spices near hot ovens (it makes the concoctions too clumpy). She will recommend that no one use a substitute for solid shortening. She discusses the novel idea of making a crustless pie.You will exit the show and find out how to collect your winnings. You will fear the process of making gelato with your girlfriend.