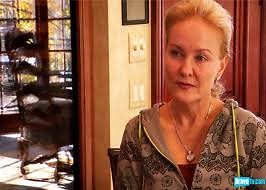 Because it's the week before Labor Day , we're talking Real Housewives of New Jersey. And how its cast is in flux, with Bravo reportedly giving deranged villainess Danielle Staub the boot and grooming Kim Granatell (Kim G.) as her replacement. But is Kim G.'s wacky Twitter account a liability?

At first glance, Kim G. has everything it takes to join Bravo's illustrious crew of Garden State hausfraus. She lives in the Garden State, boasts an Eye-talian surname, appears to have money (though looks can be deceiving), and has plenty of time to scream her way through wine-soaked lunches and bush league fashion shows.

The sister-in-law of Kim D., whose strip mall couture boutique figured prominently in RHONJ's recently completed second season, Kim G. also has the requisite flair for drama. So it makes sense that ever-subtle Bravo inserted Kim G. into the series' adolescent melodrama just as one regular (Dina Manzo) left the show mid-season and another (Staub) was fired from the first job she's likely ever held.

Will Kim G. reach the mountaintop and move from supporting player to opening credits mainstay next year? Her (unverified) Twitter account confirms her rabble rousing potential even as it reveals the sort of manic bitchery that Bravo is ostensibly trying to purge from the show with the Staub termination.

Here's a recent sampling from @kimgranatell:

"going to Rome for a out of control shopping spree. Too bad Teresa can't come. sorry no money. sad but true...."

"Mission accomplished!!! I wanted to & succeeded at crashing Danielles's BD Party at Scores. Payback is you know what!!!"

"Oh Tom surprised me here In AZ. Going to Grand Canyon on a private helicopter & not using anyone's money. Oh to be rich & not scam & phony!!"

"I know my railings are staying in my house and no one is taking them away...MINE are paid 4.. Scamming ieventually catches up to u!!!"

"Google "Planet of the Apes" (the movie), the character "Bright Eyes", and guess who looks like her and has her forehead???"

"sitting on one of my many outside decks Cristal flowing. There never will be the stinky smell of a pizzeria below where I live. Love it! yes"

"OMG! learn how to walk in those "bad" Pay Less boots with that all croaked "fat ass". OUCH! Again, trying to be something that you are not."

Consider yourself lucky if you can't make sense of these. You're no doubt busier watching more cerebral programming. Like Jersey Shore.