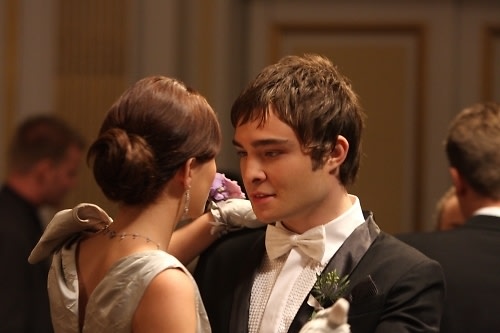 Last night's Gossip Girl totally made up for the weak Thanksgiving episode.  Everyone has experienced this age-old fact: The minute the person that you loved but didn't want you sees you with someone else, they want you back.  It is COMPLETE bullshit, but it happens I'm guessing at least twice a minute around the world.  However, unlike most of my fellow GG watchers, I WANT Blair and Nate to be together.  They are like the new Zack Morris and Kelly Kapowski....and Chuck is like the AC Slater.  The universe wants them to work out, (how cute btw was the "heart on the sleeve scene"?)  See, they have so much history together! We all know that everything's going to be much different when the group heads to college anyway, but for now, these two work together and that's that. 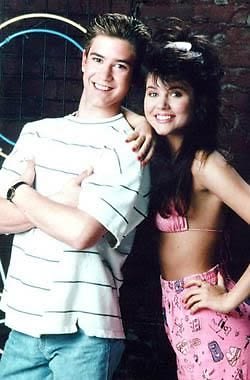 Why do girls love bad boys?  Why do all my friends feel sorry for Chuck.  Chuck is and will always be a manipulative asshole.  If that's hot to you, that's just weird.  I mean maybe for like a month it would be fun, but why are women always attracted to guys that are shit heads?  I'll pass thanks.  Some more quick observations: loved the Nanette Lepore sequined cartigan that Serena was sporting in the opening scenes.  The grandma character was pretty funny, though a tad over-done and dramatic, (which reminds me, Serena gets like over-dramatic in a lot of her scenes...she over acts maybe?  I mean she started crying right before the ball...get over it before you ruin your eyemakeup, oh and you're hair's beautiful, just comb it before putting in a ponytail next time, this IS a formal here).  Which also reminds me...Blair is so the star of the show.  I think everyone (myself included) expected from day one that Serena was the #1 girl (you know the hot blond), but if it wasn't clear yet, last night's episode re-confirmed for me that Blair is in the driver's seat. 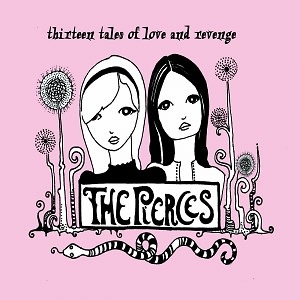 More? Well annoying mom Alison needs to leave. Now.  Her beating up on her daughter Jenny for wanting to attend the ball instead of her opening because it's "betraying the family" is like the "pot calling the kettle black".  She LEFT her family. LEFT.  They should all dump her and her pointy nose and bring in Lily even if it would be weird having your children dating each other.  At least Lily would help Jenny develop her style (did you see her Hermes Birkin ostrich bag?).  Loved The Pierces (picture above) especially when they sang "Three Wishes". Also, thought the dresses were fabulous.  To end, I think the "sex scene" between Blair and Nate was H-O-T! She looks better out of her clothes than in them!   Their bodies are both spectacular, which is why, if for nothing else, you root for them to make it work.  Here is a picture I found of the real-life cast members hanging out to support the Gap colored scarves: 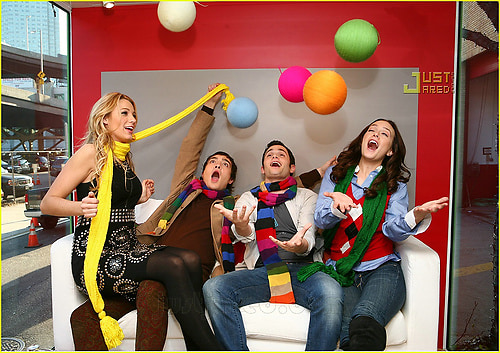