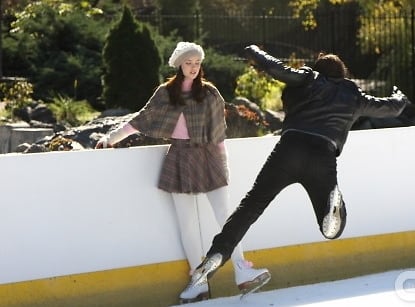 Last night's Gossip Girl was a juicy one, with the best ending the show has offered yet.  Here's my take of the good, the bad, and the ugly.

LOVED: -Blair's dad's gay lover Ramón. He was such the little hottie and great dresser (as was her father).  Their outfits throughout the entire show were impeccably put together.

-The drama between Blair and her boys. So real especially all the texting and incessant calling.  Typical behavior by anybody in her situation.  Was particularly fond of Chuck's text to her at the skating rink reading: "How did you fake your virginity for N?" WOW.  (Sidenote: well, first of all Chuck, Blair is an amazing faker of all things so that wouldn't have been such a problem). That text, (which is so typical of a teen boy), would have been unbearable to read, and the uncertainty of knowing what Chuck's next move would be, if he would tell, would destroy even the toughest of girls.  You could feel Blair's anxiety as she desperately tried to reach both of the guys throughout the show, and then the utter despair in the final scene when she gets the text of the two of them together in Monaco.  YIKES!  This is the kind of teenage drama I relish in.

-The Marriage is over. Thank God!  Now Alison will hopefully be leaving the show.  Also, do marriages really ever end that undramatically?  I guess it was to show they really weren't in love with each other because they weren't worked up about leaving the relationship.

-The "French Fox" Loved the remark by Blair's mom: "We've been friends since before Marc Jacobs went into rehab."  Aw they just had to throw that one in.  Cute.

-Blair Waldorf: I've said it before and I'll say it again, Blair is the star of the show.  She is such a pretty bitch.  I love her style and her skin of course, but her lines are always some of the best: (to Vanessa) "She (Serena) likes to see the best in people.  I like to see the truth." And her facial expressions?!  They are awesome!

-Reference to Breakfast at Tiffany's: Because that WOULD be Blair's favorite movie (along with 95% of the girls here).  Did you catch it?  When Blair's father is showing her pictures of his house in France with his new cat..."It's named 'Cat' just like in your favorite movie."  A little cliché but I still liked. The title "Roman Holiday" is also a Hepburn film.

-The Waldorf's Maid: Aww. She's part of the family.  This is very realistic I imagine.

-The chocolate chip waffles: Christmas morning at the Humphrey's aptartment. UM....My favorite.breakfast.ever.  Finally this family does something right.

-Dan and Serena: These two are too much.  They are really starting to bug me.  Serena with her perfect hair, and Dan with his gapped teeth.  First of all, who does shit like they do as teenagers??  The snow room?!  First what random warehouse were they in? No one's first time is ever that "perfect."  They are getting to be B-O-R-I-N-G...and worse than that...PREDICTABLE.  Also, no way whatsoever, on ANY planet would Serena and Vanessa be friends planning a Christmas present for Dan together.  I did like Serena's red wool coat at the beginning, her red and white striped dress and sequinced number, other than that, yeah she's gorgeous...but has little sass.

-Dan's writing.  I'm sure Dan is a great writer, and maybe he would have even gotten published in the New Yorker's 20 under 20 article.  But to have the original written the day he met Serena as a present?  No way.  And if that was the case, and I was in Serena's shoes, I wouldn't think that was cute, I would be scared for my life.

-Bart Bass: Um why the hell would he propose to Lily?  That is just ridiculous and an attempt to create unnecessary drama.

Now we're down to only two shows left because of the writer's strike.  I am hoping to see a little bit more drama out of Serena and Dan, and anxious to find out if Blair really did get away with the ultimate fake out.  Until next time, xoxo....