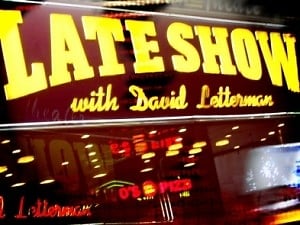 The ABC Local reports that on Sunday, 22-year-old James Whittemore was arrested for criminal mischief and burglary after he drunkenly ransacked the lobby of the Ed Sullivan Theater.  Police are still investigating, but Whittemore claims it was a random drunken act, and he doesn't even remember doing it.

Then, on Thursday, Alvin Moore, an aspiring comedian with big dreams of working with David Letterman. He sent several demo tapes to Letterman, and never heard back. So he did the logical thing, he got absurdly drunk, went to the Ed Sullivan Theater, threw a newspaper box through the window, and flailed various body parts at the door until he bled.  Eventually the security guard noticed the boozy, bleeding man on the front steps and armed himself with a golf club to go arrest the bozo. His charges include criminal mischief, menacing and burglary, for use of a dangerous weapon. A gun? A knife? Nope, a newspaper box. [Via]

Has Ed Sullivan Theater become a new hot-spot for drunken men with vendettas against glass doors and David Letterman? It certainly seems that way. Maybe they had a few too many at Iguana New York and got thrown out, only to wander down the block smashing things in a fit of alcohol induced rage. The world may never know.

Both Letterman ad his late-night rival Jay Leno cracked jokes about the incidents. Letterman's category for his famous Top Ten List was "Top Ten Excuses of the Guy Who Broke into the Sullivan Theatre."  The list included "Had an allergic reaction to Four Loko", "It was on my list of places to ransack before I die", "When did stupid human tricks become illegal?" and more. Watch the video HERE.

Leno showed footage of himself leaving the theater (and crime scene) in a doctored new report, and joked "Hey, you know I'm gonna get blamed anyway". It appears that destroying the Ed Sullivan Theater is the latest trend among alcoholics. Letterman said it best when he said "It's not just a talk show-this is an active crime scene".