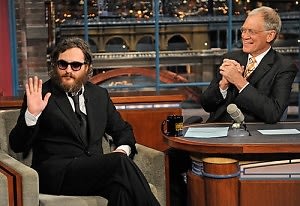 On September 22, rapper, "retired" actor and all around pain in the ass Joaquin Phoenix will return to the Late Show with David Letterman 18 months after a bizarre, possibly phony meltdown on said late show imperiled his career and regrettably made him a bigger pop culture curiosity than ever.

I don't know if Phoenix will try to make amends for his previous Letterman fiasco. I doubt he'll promote his floundering (hoax?) of a rap career. And I assume he'll plug I'm Still Here, the just released movie he stars in about two years after announcing his retirement from acting. I'm Still Here is ostensibly a documentary about the actor's unraveling. If we take director Casey Affleck at his word, that would mean Phoenix wasn't technically acting. But many critics have cast doubts on the documentary claim, viewing I'm Still Here as a performance art piece that savages the celebrity-media-fan complex.

Oh, and the whole film more or less pivots on that notorious Letterman bit.

One thing I know for sure is that I'm Still Here is one of the most excruciating cinematic experiences I can remember forcing myself to sit through. Whether it's "real" or "fake" or is meant to make the viewer ask if any movie can be considered "real" or "fake" doesn't matter. It's rarely funny and seldom interesting and tries to defend itself and its subject from those criticisms by wrapping their self-seriousness and banality in a cloak of celebrity satire. It's hard to attack Hollywood solipsism when the movie star subject and movie star director are so clearly infatuated with each other and their shared disdain for the celebrity that let them build their self-indulgent soapbox. You leave feeling dirty.

Even if he hasn't endured the movie, I'm surprised Letterman invited Phoenix to return. Ratings will likely spike. And it's conceivable that the host was in on the joke, if it was a joke. But decades of interviewing convincing actors doesn't make you one. And Phoenix's antics, which included sticking gum on Letterman's desk, made the perma-crank seem even more miffed than usual.

Then again, Letterman did forgive and repeatedly welcome back Madonna--a more honest, canny and entertaining media manipulator--after her profane, cigar-scented rant on his couch in 1994: