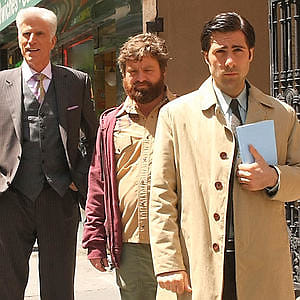 Season two of Jonathan Ames' postmodern detective comedy Bored to Death premiered on HBO last night. Local fans of the local series got a head start with a showing at Building on Bond in Boerum Hill. Ames, cast (including Jenny Slate) and an open bar (who says cable networks are cheap?) accompanied the episode. -

It was a very Brooklyn party for a very Brooklyn show. The quaint Building on Bond was at roughly triple capacity as fans crowded between the cafe's table to watch the episode unspool on a roll-down projection screen. Ames, 46, might have been the oldest person there. And the anglophile was far and away the best dressed, in a plaid hunting jacket and tweed cap.

After the show, Ames said he had set most of the season debut in Manhattan "to be weird." Weird, indeed. The episode entailed Craigslist private investigator Jonathan (Jason Schwartzman) infiltrating an S&M dungeon to destroy evidence of a police officer friend's visit and ended with him running through most of Manhattan and into a glossy magazine board meeting in full gimp suit. There were also snipes at enlightened 21st century pursuits like yoga--cast member Zach Galifianakis in downward dog? Amazing--and the eternal, hopeless struggle of aspiring writers. 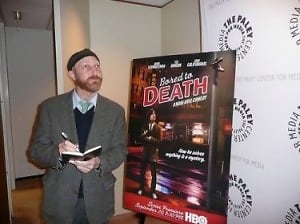 Casualness also allowed Ames to answer a question about how much of himself he incorporates into the series with digressions on Viagra, "penis dysmorphia" and ex-girlfriends who liked to be watched by Thompson Street neighbors during sex. Ames said that Dean Haspiel, who won an Emmy for Bored to Death's opening titles and was there last night, was one of those neighbors.