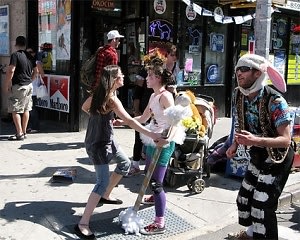 Always ahead of the curve, MTV is filming a series about hipsters in Williamsburg. At least that's what a Craigslist casting call leads us to believe. And if you own a pair of skinny jeans, a fitted sweater or a "cabbie hat" (whatever that is), you could be an extra.

Here's the ad, courtesy of Jeremiah:

"Do you own skinny jeans, old school chucks, cabbie hat, the 70's vest, an ironic t shirt or hat, a fitted sweater, flannel shirt, or chunky lens-less glasses? Do you drink PBR, have an ironic mustache, have a blog that allows you to post pictures you took with your digital camera? Been called a hipster? Deny being a hipster, but own various wardrobe and sport an asymetrical hair style that is considered Non-Mainstream? Smoke Parliaments? Got any cool tattoos? Perhaps one of a star, maybe on your wrist or elbow? Own a vintage dress or have an awesome beard?

If you are interested in being part of this pilot, please send a current photo (candid shots are preferred) and contact information to HBOAmerica@gmail.com . Shooting the week of 8/30/2010. Please note if you have any conflicts during this week."

I won't be too hard on the show, even if it's titled I Just Want My Pants Back. It comes from the great Doug Liman, the man behind Swingers, The Bourne Identity and fantastic ecstasy saga and '90s time capsule Go. He also directed Brad and Angie in Mr. and Mr. Smith, so tabloid editors and Jennifer Aniston's shrink are forever indebted to him.

Plus, the Publishers Weekly description of the book on which the show is based goes like this:

"Jason Strider, the slacker-hero of former ad-man and MTV series creator [David] Rosen's screwball debut novel, is a recent Cornell grad more interested in marijuana, booze and quick lays than his boring job or romantic relationships. The carnal drought he's been experiencing is mercifully ended early in the book with a bout of athletic sex involving his refrigerator..." Also, I've often wondered why a defining, epochal television show or film about Williamsburg and environs hasn't sprung from the minds of all the creative types living and playing in North Brooklyn. It's easy to roll yours eyes at the notion of hipster ennui, but some entertaining evidence that disproves the cliche is long overdue. By the way, no offense to the great Brooklyn music scene, the deadpan Flight of the Conchords or It's Always Sunny In Philadelphia, a show which expertly captures modern shiftless youth even if its inspiration comes from down the turnpike.

Maybe some historical perspective is needed to bring Williamsburg hipsterdom into focus. With monstrous luxury condos dotting the waterfront, and a Gansevoort-y boutique hotel coming soon, I Just Want My Pants Back could be a great memento of the era, even if it's a photo that immediately acquires an aged, sepia look.