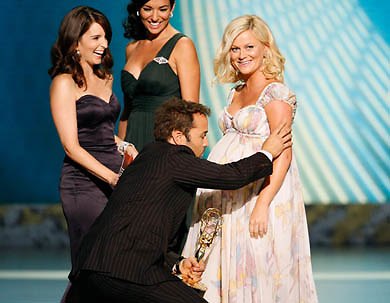 [Jeremy Piven worships the womb of Amy Pohler. All photos via]

Last night was the 60th Primetime Emmy Awards. Though, many didn't seem to care (there is currently not even one link on Drudge Report in regards to the show). I did not actually engage in watching the awards but got everything I needed to know about them in 3 minutes while browsing through the photos.

1. Politics were off limits, which means, despite popular opinion, there are at least a couple of Republicans on the board with cash.  This didn't keep Jeremy Piven from worshiping the goddesses of SNL that gave us the giggles last week.

2. Mad Men and 30 Rock. That's pretty much all you need to know to take part in any Emmy discussions at dinner tonight.  Though, if you're interested, here's the full list.  Unfortunately, I haven't seen either of these shows, which means I pretty much can't go to dinner for the rest of the week.

3. Josh Groban gave a performance with can-can dancers and was apparently pretty excited about it.

4. Jennifer Love Hewitt and Hayden Panettiere presented some kind of award together (probably best hair and makeup or something). This makes me think that the Emmy organization actually does have its head on straight, they picked the most annoying tv actress from the '90s and paired her with the current one. Brilliant.

And there you have it, practically everything you need to know about the Emmy's without having to actually put in the 3+ hours of watch time.

The 60th Annual Emmy Awards• Everything U Need 2 Know