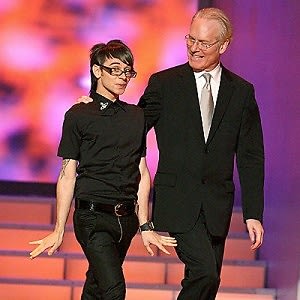 Christian Siriano, pixie warlord and Project Runway Winner of Yore, has a one-hour special about his fabulous life airing on Bravo at 10 tonight. What is the entire programming output of Bravo good for, if not for drinking games? We did the hard work for you:-

ChrisSi was never our favorite. We liked Chris March, because the editors kept showing us footage of him running around, and we love an underdog. Also, he was the only one who seemed like he might actually enjoy cuddling. However, despite Siriano's irritatingly chihuahua-esque size, we can't help but love the little guy. He's talented, he's really funny, and he's a caricature of a human being (albeit a caricature that we think Siriano himself has cleverly and calculatedly manipulated for PR purposes). We've based our rules on exhaustive research into youtube tribute videos of the Bitty Baltimore Bombshell, which is a nickname that we hope catches on.

Take A Sip When:

Christian poses for a picture or noticeably shifts in a shot so that his head is partially in profile and he's side-eying the camera. Take small sips. Based on past precedent, he will be doing this for the entire show:

Christian complains of being tired.

Christian swirls his head around but his hair doesn't move.

Christian says "fierce." We know it's so '08, but we don't think he can kick the habit so easily.

Christian says "bitch," "bitches," "bitched," or any other form of the word.

Christian's glasses are too low on his nose and he is visibly struggling to see out of them.

Christian makes a gay joke. If you aren't sure whether the words that Christian is saying are gay jokes or not, ask yourself: Is Christian talking about the gay experience? Is Christian doing this in an attempt at levity? It does not matter if the jokes are not actually funny.

Heidi Klum appears. (Bonus 2 shots if she picks up, manhandles, or otherwise lords her Amazonian height over Christian.)

Christian mentions his family. He loves his mama. She got to retire because he's doing so well know! Aw. Now if only Christian's mama would get married to Chris March, we would all be happy forever.

Drink The Whole Bottle If:

Tim Gunn appears, performs "Romy and Michelle's High School Reunion"-style dance with Christian. It would be like this: