Superheroes are no longer only found in comic books.  Walk the streets of the West Village at night and you could see someone, in his late teens or early 20's,  dressed in body armor, bulletproof vest, knee pads, or other crime fighting gear. 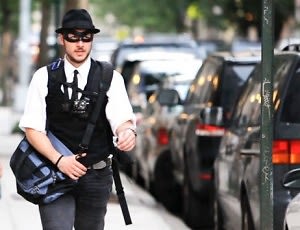 These modern day vigilantes prowl the streets of New York in search of crime. They call themselves professionals and are trained in martial arts and self-defense. Their method of patrol includes bait missions where one of the vigilantes walks around in nice clothing with an iPad with the others following behind  to chase and capture stolen goods by muggers.

Last night was the debut of a new documentaryon HBO called Superhero which explores the cultural phenomenon of the 300+ registered real life superheroes in America through candid interviews, patrol footage, archival material and motion graphics in an attempt to understand what propels ordinary people to take the law into their own hands.

Superhero creator, Stan Lee is interviewed in the documentary and his terse response to these real life superheros: "This concerns me". Walking around with weapons in the streets will get you stopped by the police, even if you are wearing a cape, which according to Portland Mercury columnist, Steven Humphrey no self-respecting superhero should do. The documentary highlights interactions between the real life super heroes and police enforcement. It does not always go well since these vigilantes do not collaborate with the police on any of their activities and harbor mistrust for most organizations. Even though these real life superheroes do believe they are doing better for their cities, in fact they are just contributing to the chaos already in place by these criminals.

A very good illustration that crime fighting perhaps should be left to the real professionals and not just self-proclaimed kind is this quote from a real life superhero: "I have been tased by my own stun gun before. It's unpleasant".