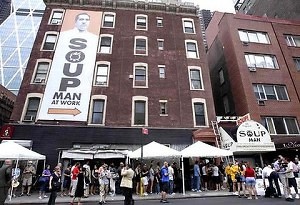 New York City's most famous purveyor of soup, made famous after he inspired Jerry Seinfeld's "Soup Nazi" character on the popular TV show, reopened his original Manhattan stall yesterday on West 56th near 8th Ave. But the original soup nazi, Al Yeganeh did not show up for the celebrations.

Yeganeh - who calls himself "The Original SoupMan", detests the "Soup Nazi" character" - despite it no-doubt being good for business (after the original location closed in 2004, he opened another 22 shops and served up his soups online) and banned Jerry Seinfeld from his stall after the infamous episode aired in November 1995.

One of the better, if not greatest Seinfeld episodes, Soup Nazi has got us wistfully reminiscing back on one of the great NYC shows - even if it was actually filmed on a sound stage in LA. 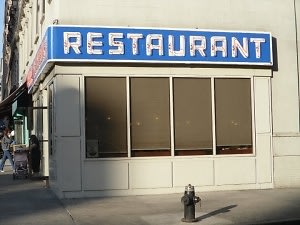 Yes it's been photographed in 1000's of tourist shots, with everyone looking for their piece of Seinfeld memorabilia. But we can't seriously write about famous NYC outposts as featured in the show without mentioning the real life Tom's Restaurant. Located at 2880 Broadway at 112th St. exterior shots where the only thing used on the show.

The diner was the "Central Perk" meeting spot for the gang to sit face-to-face and discuss mostly nothing, it also has the distinction of being the only place where Elaine can get her favorite "Big Salad".

The official street address Jerry Seinfeld always used, 129 W. 81st St, is in fact the location where the real Jerry Seinfeld lived back in his New York stand-up comic days before becoming a big TV star. However, his neighbour was not the real-life Kramer, a.k.a Kenny (not Cosmo) Kramer. That honor belonged to writer Larry David, who the character George Costanza is based off, who lived in an apartment building on 43rd St and 10th Ave. 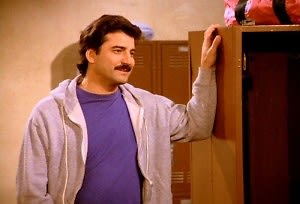 Located at 5 West 63rd St, this is where Jerry and George meet baseball player Keith Hernandez. Jerry discusses how men just do not make "new" friends and treats Keith like the two of them are dating. Meanwhile, Kramer and Newman hate Hernandez, believing he once spit on them after a Met's loss, re-inacting the spit "JFK" shooter style. Was there a second spitter??

In Part Two of the episode, Keith is attracted to Elaine and breaks a date with Jerry to take her out, but eventually the two (Jerry and Keith, not Keith and Elaine) end up breaking up after Jerry thinks the relationship is moving too fast, after Keith asks for his help to move apartments. 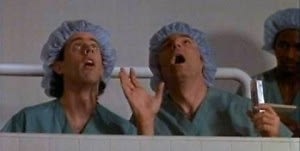 The hospital located at 10th Ave & 59th St, is the scene of many a Seinfeld mishap, that many in fact, we had to steal the full-list from Greg Gattusos book, The Seinfeld Universe:

Jerry and Kramer watch an operation and accidentally drop a Junior Mint into the patients open body cavity; George finds a perfect parking spot only to have a suicide jumper land on his car; Kramer sees a pigman; Elaine goes for stitches after being bitten by a dog; Kramer promises a sick child that Yankee Paul ONeill will hit two home runs for him in exchange for a birthday card signed by the Yankee organization; George tries to get Marisa Tomei's phone number from Elaine's ill friend; George begs Susans cousin - who is in labor - not to name the child Seven. 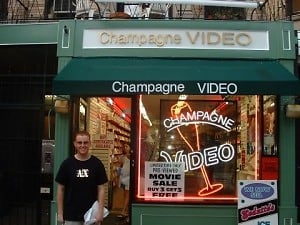 This is also the place where Eliane falls in love with one of the store employees. Due to his impeccable taste in movies, she thinks they are destined to be together, until it turns out he is a 15 year old boy named Vincent, discovered after being busted by his Mom buying him cigarettes, vodka and fireworks. 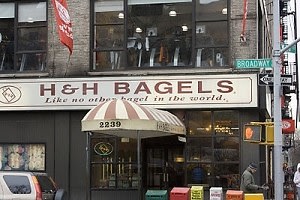 A NYC landmark in its own right, this UWS institution (2239 Broadway between 79th St & 80th St) is where we found out Kramer really works, albeit, has been on strike for the past decade.

The bakery was actually moved to no-mans land opposite the Intrepid at 46th and 12th Ave, but the UWS remains its most famous location.

Mendy's is a Kosher deli chain dotted around NYC, with the Rockefeller Centre site where Jerry took Banja for a meal in order to pay Banja back for an Armani suit that Banja gave him. However, all Banja ordered was soup. Kenny tells Jerry, "Soup isn't a meal.", and tells him he needs to buy him a meal later.

To this day countless arguments have ensued as to whether soup constitutes a meal... (supermodels aside).

1st and 1st - The Nexus of the Universe

Remember the Seinfeld episode where Kramer has to start a "long distance" relationship when his girlfriend moves downtown. He gets lost while visiting her, and calls Jerry freaking out "Hey, Im on 1st and 1st. How can the same street intersect with itself?"

Here at GofG we do love ourselves a slice of Ray's Pizza, most commonly found downtown at West 11th and 6th Ave and 3rd Ave and St Marks. Famous Original Ray's on the other hand is located in Seinfeld's main hood UWS, at 462 Columbus Ave. 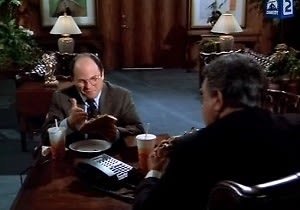 The Yankees was George Costanza's most famous place of employment, after he tried out a period of doing everything the opposite, he landed his dream job.

The Yankee's sub-plot was made even more memorable with Larry David himself providing a non-stop talking, crazed version of recently deceased team owner George Steinbrenner. 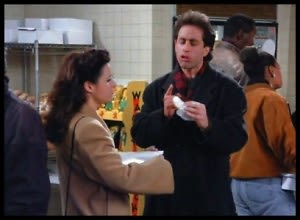 237 West 72nd between Broadway and West End Ave.  Jerry and Elaine cannot get an all important chocolate bobka as Jerry contemplates racial relations as he eats a black and white cookie.  Jerry also ends a 13 year streak by throwing up in the bathroom.

The thing about eating the Black and White cookie, Elaine, is you want to get some black and some white in each bite. Nothing mixes better than vanilla and chocolate. And yet somehow racial harmony eludes us. If people would only look to the cookie all our problems would be solved.

If visiting the Soup Man/Nazi just to mindful of the rules. Made famous in the show, they are very much still in effect:

Pick the soup you want!

Have your money ready!

Move to the extreme left after ordering!

Otherwise, "No soup for you!"