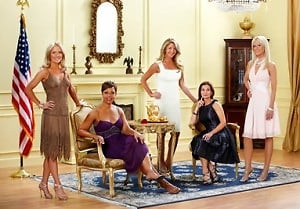 America's Thursday night schadenfreude party gets a new guest tonight when Bravo debuts Real Housewives of Washington D.C. But will the eighty-first edition of the franchise--Real Housewives of Oneonta is in the works--be able to serve up the same delicious secondhand embarrassment as its predecessors?

In her Times review of the show, Alessandra Stanley writes that the premiere reveals "the missing clue to the White House gate-crashers scandal, and perhaps the entire mystery of modern social climbing."  But the mystery of the franchise's appeal isn't tough to crack. Viewers don't want to see successful social climbing. They prefer to laugh and cringe at appalling etiquette gaffes made while scaling the ladder, and really want to watch people slip off it.

The problem with D.C. is that its cast won't have as far to fall. D.C. is the first Housewives show to debut after the worst of the recession's dust had settled, which means viewers will probably miss out on the cast's ruination.

And what prime rubbernecking The Real Housewives of: Orange County, New York, Atlanta and New Jersey have provided!

Two of the OC broads suffered real estate woes, with Lynne Curtin being evicted and Tamra Barney contemplating a fire sale (and a divorce). New York City's beloved strivers seemed to emerge from the recession relatively unscathed, though Alex McCord lost a Victoria's Secret job and Jill Zarin lost a Hamptons pad, allegedly through a profitable, shrewdly timed sale. NeNe Leakes, the zaftig doyenne of exurban Atlanta society, was evicted in December of 2008.

And, in the splashiest fall from grace yet for a franchise cast member, New Jersey Housewife Teresa Giudice and her husband Joe's bankruptcy filing revealed the couple was $11 million in debt. Property went into foreclosure, though not their steroidal primary residence, and their goods go to public auction on August 22nd. 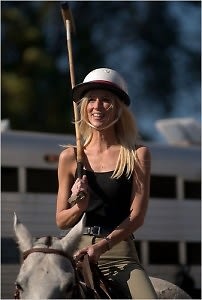 Of course, the first ladies of Bravo find all sorts of ways to embarrass themselves, and not just financially. There are "leaked" nude shots (McCord's), sex tapes (Danielle Staub's of Jersey), and unfortunate side jobs usually having to do with what could charitably be described as fashion.

We'll have to wait for the season to unfold to gauge the true socioeconomic standings of the capital's hausfraus. But unlike with the installments that premiered or were shot pre-recession, any severe wounds to pride or checkbook have likely already happened.

As Stanley points out, scandal tainted cast member and White House crasher Michaele Salahi,left,before her Bravo coming out party. But Housewives viewers are interested in seeing their heroines suffer, not undo, damage.