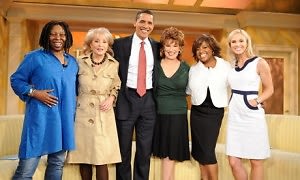 Set your DVRs to cringe, folks: Barack Obama is visiting the ladies of The View tomorrow! Though Obama braved the screechy kaffeeklatsch as a candidate, this is the first time a sitting president will dish with the gals. Before Sherri Shepherd asks her questions, we have one of our own: why?

Beyond the practical goal of appealing to female voters whom I suspect make up the majority of The View's audience, Obama's got other reasons to look forward to the head scratching appearance:

Whoopi Goldberg will defend anyone: Obama's got legions of critics, but has thankfully avoided a sordid tabloid scandal. Even if he'd suffered one, Goldberg would no doubt have his back. After all, this is the woman who dismissed the statutory rape charges against Roman Polanski by saying his hot tub incident wasn't "rape rape." More recently, she claimed Mel Gibson was not a racist despite some unsettling audio evidence to the contrary. 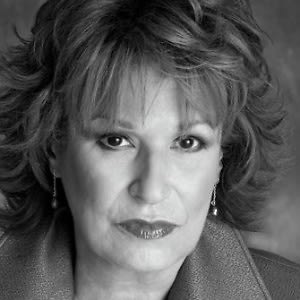 Hard news is soft news is hard news: As the New Yorker's Nancy Franklin put it in an article about Larry King's departure from and general reshuffling of CNN, legitimate media outlets are struggling to balance rigorous journalism and just enough fluff to "reel in viewers starved for news of Paris Hilton, Mel Gibson, Kate Gosselin, and the attractive young women who can be counted on to disappear or be murdered on a regular basis."

If CNN is willing to dumb itself down, why shouldn't The View put on its thinking cap? Per Franklin, America's Got Talent judge and former unethical tabloid editor Piers Morgan is King's likely primetime replacement.  His competition might include The View's veteran battle axe Joy Behar, who'll have a chance to get her Cronkite on tomorrow, before segueing into "Hilarious Housewives," the show's amateur comedy segment she moderates with a grimace.

Soft focus lens: God bless pioneering lady journalist Barbara Walters. Frankly she's earned the right to bathe in the warm, fuzzy glow of soft focus camerawork, the A/V equivalent of the Fountain of Youth. Obama will appreciate the charitable cinematography, since the man has quickly joined the ranks of presidents whose hair goes totally to gray once in office.

Obama will destroy Elisabeth Hasselbeck in a split screen debate: Despite some borderline wackjob political opinions, Rosie O'Donnell is a force to be reckoned with. But when the former View host couldn't stand the heat of an exceedingly unpleasant argument with Republican cheerleader and co-host Hasselbeck (who alleged that O'Donnell equated American troops with terrorists), Ro got out of the menopausal kitchen. I wouldn't want to be anywhere near an Obama smackdown of the Friend of Palin, but wouldn't mind surveying the wreckage.