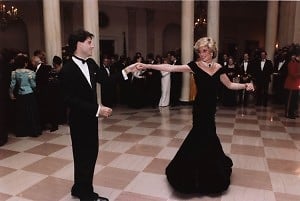 In Your Closet: You quite literally invented Sloane Ranger chic, Brit counterpart to the Ralph Lauren preppy. You wear Hunter wellies in an authentic, non-Kate Moss way.  Your tan pashmina is a physical extension of you. It's all about the cardigan, whether striped, beribboned, bejeweled, or perhaps bedraggled. And the full skirt, like this houndstooth from Kate Spade. And the tea dress. Plus the ubiqutious Mulberry Alexa dangling whimsically from your arm. In terms of formal dressing, red is your favorite hue for frocks, such as this one-shouldered confection from Notte by Marchesa. In truth, it's really all about Stella McCartney, but a modern Diana also dares in Christopher Kane. 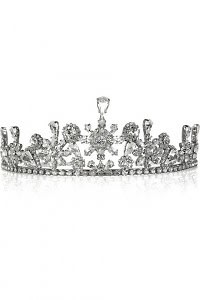 Amongst your Crown Jewels: First and foremost, the now doubly famous sapphire and diamond number from Garrard, Crown Jewel(l)er. But since that particular piece may be on loan for quite some time, it's your Lady Di luck to have a veritable couture ensemble of jewels.  The blues and maroons of their Georgina Chapman-designed capsule collection suit you nicely. You turn to Asprey for garnet earbobs, as well as the Windsor necklace in aquamarine. This tiara from Louis Mariette is a good one for casual appearances.  And equal parts nostalgic and contemporary, a Links of London friendship bracelet is just the right sort of rememberance.

What to Sleep In: In your heart of hearts (read: pre-all the King's PR men treatment), your aesthetic is prim nursery school with a dash of ballerina. Ergo an extravagantly vulgar look-at-me teddy (read: Camilla Parker Trampy) will just not do. Instead, you opt for pretty-at-their-plainest camisoles from Petit Bateau topped by a Cath Kidston robe.

Your Beauty Regimen: Largely speaking, primping is done for you, but you do love running a Mason Pearson boar bristle through your flaxen locks.  Your childhood fondness for Cadbury Buttons and Bassett's licorice allsorts has yet to dissipate, so you keep some in a dish on your antique Chippendale vanity for a nibble as you're being done up.

In your Library: Wuthering Heights, as something about emotionally distant men in power really speaks to you, as well as a treasured well-worn copy of Noel Streatfeild's Ballet Shoes.  You don't really require a Debrett's since you've sort of won that game or Peter York's manual on your look, but you were sent first edition copies of both so they're enshelved somewhere nonetheless. Andrew Morton's tome, however, has a prize place. 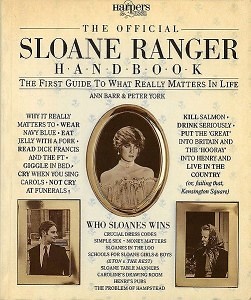 Where to Dine: Sunday supper at Tea and Sympathy for when you're feeling nostalgic for a true Yorkshire pudding.  You frequent Gordon Ramsay's little do as much for his status as Royal Subject as his possession of multiple Michelin stars. And you like the chef's table best for its kitchen-esconced privacy and potential for interactivity.

What to Drink: Princess Diana's libation of choice was a chilled white wine, and it's easy to imagine you coolly enjoying a cool Domaine Chevrot at the St. Regis. You likely prefer to do so at Astor Court, with its just-like-home/palatial Porthault, Limoges and Waterford, instead of the overly-themed King Cole's Bar. Plus, the bar's signature Bloody Mary unfairly takes the focus off of you.

Favorite Flower: It is well-known that Lady Di's best bloom was a white rose. A Diana of today arranges those English roses along with complementary ivory peonies and incandescent ranunculus in small monochromatic bunches on her Darcy Table by Shabby Chic Couture.

Gadget of Choice: When 750 million people are watching your wedding (and subsequent every move), you had better give them a flawless face to ogle. Luckily, your Clarisonic is just the device to maintain your porcelain doll visage between facials. 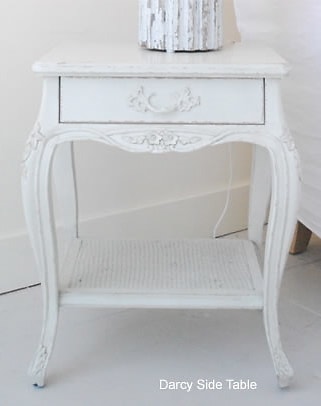 On a Budget: Princess Diana's signature writing paper was blue. Conveniently, so is Smythson's. Their Keep Calm And Carry On notebook is just right for jotting.

The Cross Dress: Toff it up in these Tod's. And it goes without saying that a knife-sharp pleated sky-blue hankie peeks out of your breast pocket rather rakishly.

(A heartfelt RIP to the People's Princess - and congratulations to Prince William and Catherine Middleton on their upcoming nuptials!)