The Westway may finally open, The Bunker is adding another bar, Frank Roberts is leaving Rose Bar to open the Brewster, a moratorium has been placed on N. Brooklyn liquor licenses, The Box bans Snooki, Russian psycho squirrel gets a vodka, and more. Today's nightlife round-up is really excited to get the weekend started. Dance party!

1. The Westway May Finally Open! [Eater] [Image Via Paper] 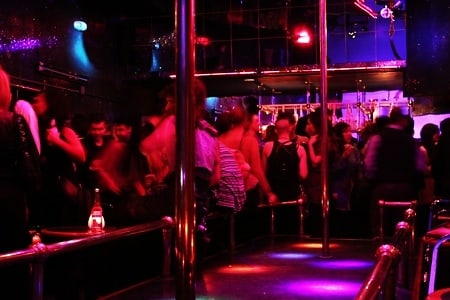 The Westway, aka 'the hipster stripper club,' has been delayed over concerns about traffic flow. At last night's SLA Licensing Committee meeting Matt Kliegman and Carlos Quirarte brought results of studies about traffic in the area and an actual traffic engineer should anyone have any questions. No one can say they weren't prepared. They also had over 200 signatures in support and around 15 letters of recommendation from cultural institutions throughout the city. Not many spoke out against the venue and it looks like they may finally open after making the following concessions:

"Keeping consultants on hand to make sure all traffic issues are cool and doing monthly traffic studies/updates, many security guards, putting in a request to the DOT for a No Standing sign, no promoters, no bottle service, no flashy signs, no sidewalk cafe...they seem to really just want to be there and are willing to work with the community to make everyone happy."

2. Other Bar Updates From the SLA Meeting [Eater] 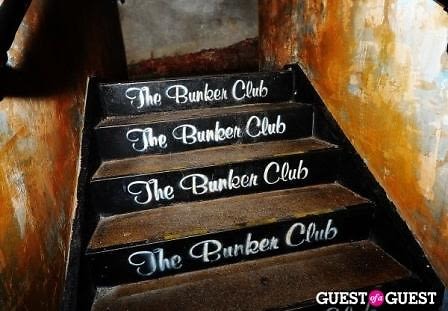 The Bunker will be getting another bar in the back where the service bar now stands.

The Gaslight will be serving drinks outdoors! Maybe Summer will hear about this and hurry the fuck up already. 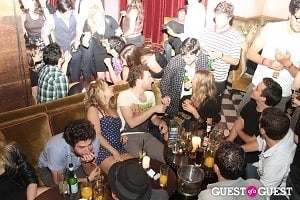 General Manager Frank Roberts has left Rose Bar to start a new venture, The Brewster, a restaurant and bar with an upstairs cafe on the corner of Mott and Broome streets. He's the latest to leave since Aby Rosen took over the Gramercy from Ian Schrager. The Brewster is set to open in September---just in time for Fashion Week! 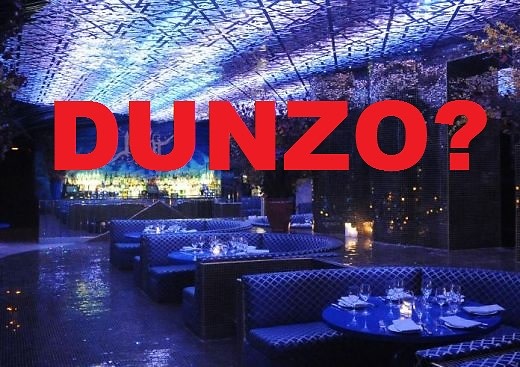 Matt Oliver, who is rumored to have left Juliet for an EMM Group property, isn't the only one jumping ship.  Chi Chi 2121 has heard that Shawn Kwek, who worked at Greenhouse and Juliet, will be leaving as well for a marketing director position at 13th Street Entertainment (RdV, Kiss & Fly, Beaumarchais).

A rep wrote back with a response on each former staffer, adding:

"We wish our staffers that are moving on well and want to make it clear that Juliet is financially and structurally stable. Our Sunday party continues to be one of the best Sunday night parties in NYC and we are thankful to all the celebrities and friends that support us.” 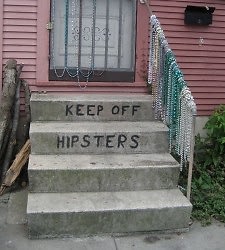 The Executive Committee of CB1 Brooklyn voted unanimously to institute a moratorium on new liquor licenses in Williamsburg, Greenpoint and the rest of North Brooklyn. area.

"The Committee did not vote on a moratorium, but the issue is sure to come at next Tuesday's full board meeting."

Yikes! If you want to fight for your right to have innumerable options of places to drink PBR and discuss the latest buzz band, the full board is having a meeting next Tuesday, April 12th, at the Swinging 60s Senior Citizens Center, 211 Ainslie Street, Brooklyn. 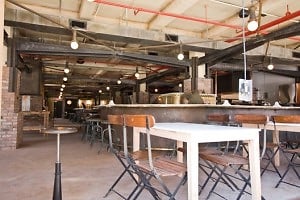 Spitzer's Corner's Rob Shaliman is opening a massive, new, 6,000 square feet bar in Greenpoint called Spritzenhaus. They plan on having 25 beers on tap at four different stations. Hopefully the above moratorium won't put a stop to what sounds like beer utopia. 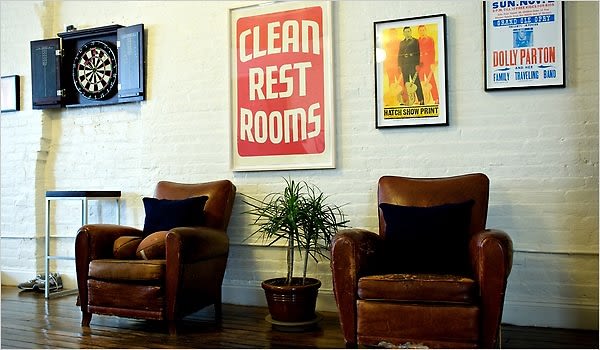 Rehab is so alt. It's really no surprise that Brooklyn's hippest neighborhood has one. Loft 107 was opened in 2009 by Joe Schrank and is "a high-end facility for people who have already gone through the isolation of rehabilitation and want an intermediate step back into their regular lives." There is a 30 day mandatory stay, though patients can remain longer.

"Sprawling across three apartments on two floors that total 7,000 square feet, the light-filled space is furnished with sectional couches and club chairs from Restoration Hardware. Exposed brick walls are hung with framed Hatch Show Prints, rock-themed art and flat-screen TVs. The overall effect is of a spread in a shelter magazine or the set of a reality show. “It’s the ‘Real Sober World,’ ” Mr. Schrank joked."

Note to MTV: I would maybe watch this (at least it's a better idea than The Scene: LES). Residents also get homemade muffins. But if that sounds good enough to you to stop boozing, you probably can't afford it. It's $12,500 a month to occupy a room alone; $8,500 to share with two others of the same sex. They also have to adhere to a whole bunch of rules.

Nur Khan, part owner of Don Hill's, plans to encase the late nightlife legends leather vest and boots at the part of bar where he used to keep watch over the night. Nur also plans to start a charity, Hill's Memorial Kids for Guitars.

Don Hill was laid to rest on Wednesday. His sister Diane Cheer read "Miss Me, But Let Me Go," by an unknown writer during the service, and said she chose it because her brother wouldn't have been cool with her supporting a big-name author. Mick Rock, Bob Gruen, Miss Guy, Bebe Buell, Lyle Derek and Leigh Lezark were in attendance. 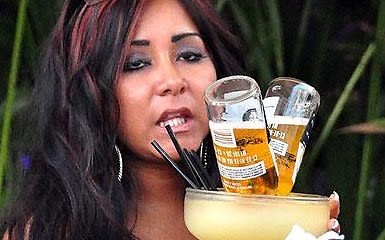 "The Jersey Shore" is not welcome at The Box. Castmates Deena Cortese and Sammi "Sweetheart" Giancola were invited to blogger Micah Jesse's fourth-anniversary party at the downtown club, but an hour before they were due, the girls were told they were disinvited. Sources said Box owners didn't want the "Jersey Shore" stars at their venue, presumably objecting to the fist pumping and heavy drinking they do on the MTV show. But other reality stars, including "Real Housewives" Kelly Bensimon, Sonja Morgan and Lea Black, were welcome at the party."

Take a look at pics from Micah's party HERE! 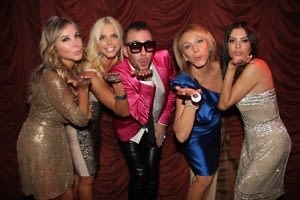 10. East Village Beer Drinkers Get Their Own Ale [DnaInfo] 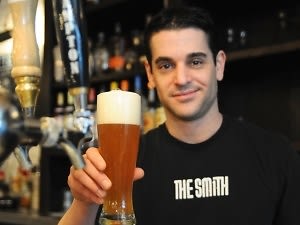 "The bar spent six months consulting with breweries, and ultimately decided to go with Brooklyn's Sixpoint Craft Ales because they thought the microbrewery was the most successful at catching The Smith’s flavor."

It will also be served at the Jane.

11. The Russian Psycho Anti-Alcohol PSA Squirrel Now Has Its Own Vodka [Animal] 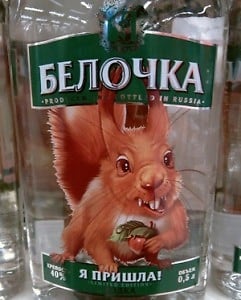 The Russian Health Ministry released an anti-alcohol PSA with a terrifying looking hell squirrel, who I imagine is saying the type of things that come out of Charlie Sheen's mouth.

Booze purveyors have taken the mascot as their own for a new brand of vodka. The end line in the video is  “I’m coming for you.” The vodka’s byline: “I’m here.” 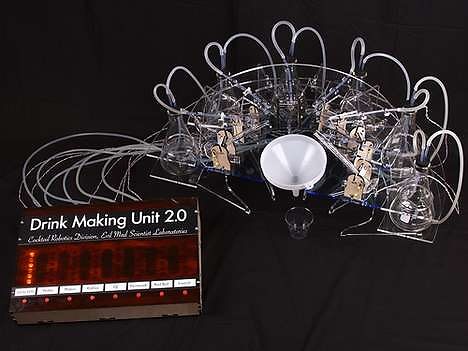 This extremely geeky contraption can actually create the perfect cocktail using only six ingredients. Can someone please buy/make me one of these?

And after all that alcohol news comes this...Have a Happy, happy weekend everyone!

"According to a study of 363,988 people reported in the British Medical Journal, one in 10 of all cancers in men and one in 33 in women were caused by past or current alcohol intake. More than 18 percent of alcohol-related cancers in men and about 4 percent in women were linked to excessive drinking. The study found that men who drank more than two (standard-sized) drinks a day and women who drank more than one drink a day were particularly at risk of alcohol-related cancers. Oxford University researcher Naomi Allen, who helps to compile the ongoing study, said, "This supports existing evidence that alcohol causes cancer and that the risk increases even with drinking moderate amounts."